Teodoro won the Steeplechase Allowance at Saratoga by almost 34 lengths

SARATOGA. N.Y.--Teodoro, owned by George Mahoney's Rosbrian Farm, trained by Ricky Hendriks and ridden by Ross Geraghty, turned in a virtuoso performance in the $65,000, 2 3/8 miles Allowance Steeplechase at Saratoga on Aug. 28. 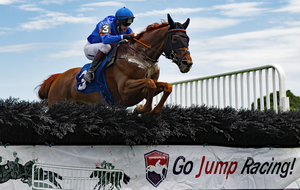 Teodoro early in the allowance (Photo by Tod Marks)Teodoro went to the front from the start and led every step of the way by 15 to 20 lengths and, instead of folding in the stretch as do most horses that open up such a lead, under a hand ride opened up the winning distance throughout the stretch to win by 33 3/4 lengths,

Jonathan Sheppard's Hepcat tried to stay in touch with Teodoro, so that he too was at times 25 lengths in front of the rest of the seven horse field, but he faded in the stretch to finish fifth with Armata Stables, also trained by Hendriks, finishing second and Eve Ledyard's Go Get  the Basil, also trained by Sheppard. finishing another 5 1/4 length back in third.

"I'm blessed to have this horse," said Mahoney, "Ricky and his whole team have done a fabulous job with this horse. He came off the flat not as a jumper when I bought him in February, and he ran second at Middleburg in a maiden race and then won at Fair Hill.        '

"ALL CREDIT goes to Ricky and Ross ," said Mahoney. "I can't tell you how lucky I am."

"Chuck Lawrence was going to buy him, but that fell through, so he told me that he had a horse that might suit us," said Hendriks. Chuck and I have been friends for years. George and I flew to New Orleans. It all happened in two days, and in three days he was in a stall in Camden."

"Teodoro came from England, and his English trainer ran him in the G1 Hirsch Turf Classic, where he ran fifth," said Hendriks. "Then Tom Morley trained him."

Teodor ran seventh and fifth on the flat for Morley before Mahoney bought him.

"He set a track record when he won at Fair Hill when he broke his maiden, so we thought we had a pretty nice horse," said Hendriks. "He's quiet in the barn until you go to gallop him, and then he's very strong."

"He 17.1H," said Mahoney. "His stride is so long other horses are taking a stride and a half to his one."

"We're aiming for the novice race at Belmont next," said Hendriks.

To put Teodoro's win in context, his race was the same length as the G1 Turf Writers the week before.

"He's a nice horse, if we can just keep him in one piece," said Mahoney.