Jonathan Sheppard wins another, this time with a homebred

WEST GROVE, Pa.--Jonathan Sheppard is on a roll. 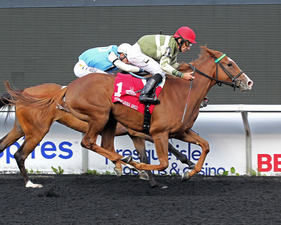 Dawlish (Photo by Coady Photography)Coming off a spectacular win with Winston C  in the G1 Turf Writers in Saratoga, Sheppard secured another win on Aug. 26, this time with his own homebred 3-year-old, Dawlish in a $30,000, 6 furlong Maiden Special Weight race at Presque Isle.

"This was particularly satisfying, because she's a homebred, and it was her first start," said Sheppard. "We kind of suspected that she might win, but I thought she might need a mile. But this race came up at 6 furlongs, so I thought we'd try it."

Sheppard always takes care in naming his homebreds, and this one was no different.

Dawlish is by English Channel out of Warm Glow, by Sky Classic.

"Dawlish is a nice little seaside town overlooking the English channel," said Sheppard. "It's not too far from where I went to boarding school. We'd get a couple of days, and, rather than go all the way home, we'd go to a nearby town.

"SHE'S OUT OF Warm Glow, and I thought you'd get a warm glow sitting in the sun on the beach there, although you don't get much warmth sitting on a beach in England."

Dawlish tracked the pace well back, moved up through the turn and gained steadily to win by 1/2 length.

HOTSHOT ANNA, owned and trained by Hugh Robertson, won the $100,000, 6 furlong Satin and Lace Stakes at Presque Isle on Aug. 19. 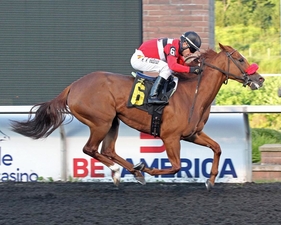 Hotshot Anna (Photo by Coady Photography)The 5-year-old mare tracked the pace, moving up to confront the leaders near the quarter pole. went to the front entering the stretch and won by 1 1/4 lengths in 1:09.4 over Spring in the Wind with Shanghai Tariff another 4 1/2 lengths back in third.

This was her second consecutive win in the Satin and Lace Stakes.

Hotshot Anna has nine career wins, six seconds and one third from 21 starts and lifetime earnings of $623,440.

Earlier this year, she placed second in the G2 Chicago Handicap at Arlington Park, and last year she won the G2 Presque Isle Downs Master Stakes and the G3 Chicago Handicap.

"We broke her," said Houghton. "I loved her. We ran her first at Penn, and she was third. I thought she'd win. But when she came back, we found she had a fractured knee.

"Patty Hogan did the surgery, and her first time back she broke her maiden. The she ran badly. It was hot, and the horse in the gate next to her was acting up. David said, `Why don't you try her long?' And {said I'd try her long, and she trounced them."

Dilly Dilly Philly settled in third on the backstretch, moved up four wide on the turn and drew away to win by 9 lengths.

Rated inside , Great Bend moved up on the final turn and drove clear to win by 4 lengths.

"It was originally on the turf, but when it came foo the turf we ran him anyway," said Houghton. "He's an all right kind of a horse. He's consistent."

REDEEMED GENTLEMAN, a Md-bred owned by Reality Horse Racing and trained by Anthony Aguirre, won a$75,000, 1 3/16 mile Starter Handicap on the turf at Colonial Downs on Aug. 24. 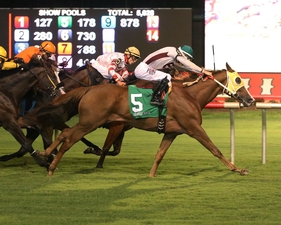 Redeemed Gentleman (Photo by Coady Photography)By Redeemed out of a Gentleman mare, the 4-year-old stallion settled off the pace, was five wide going into the stretch and closed strongly to win by 1/2 length.

The5-year-old stallion dueled five wide down the backstretch, out a head in front four wide entering the stretch, drifted in and fought back gamely tp win by a head.

Catalina Cruiser, bred by W,S, Farish, owned by Hronis Racing LLC and trained by John Sadler now has seven wins from eight starts, five of the in G2 stakes, and earnings of $691.000.