Varenka, trained by Graham Motion, in a dead-heat for the win in the Lake Placid Stakes

SARATOGA, N.Y.--Graham Motion saddled Augustin Stable's homebred Varenka, ridden by Javier Castellano, to finish in a dead-heat for the win in the $200,000, 1 1/16 mile G2 Lake Placid Stakes for 3-year-old fillies on the inner turf and under lighting streaked skies at Saratoga on Aug. 17. 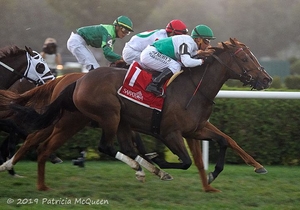 Varenka just fater the finish of the Lake Placid Stakes(Photo by Patricia McQueen)Varenka hit the wire simultaneously with Paul P. Pompa's homebred Regal Glory, trained by Chad Brown, as the pair finished a neck in front Regal Glory's stablemate Blowout with Amandrea another half-length behind in fourth.

"It was pretty dramatic," said Motion after betting favorite Varenka and second-choice Regal Glory hit the wire as one after a thrilling four-horse stretch drive.

It was the second straight victory and first in a stakes for Varenka, who won an optional claimer earlier in the meet.

Varenka now has three wins, two seconds and two thirds from eight career starts, with her only off-the-board effort coming when fifth in the G1 Breeders' Cup Juvenile Fillies Turf.

"I'M SPEECHLESS, to be honest," said Motion, who won the race in 2009 with Shared Account. "I had another one of these up here in the Amsterdam (with Secret Firm in 1998, who dead-heated with Mint) when I first started training. I just can't believe she got there because they went so slow. That was a crazy performance.

"I thought we had it won right before the wire and right after the wire, but I wasn't sure on the line. All credit to Javier. He said he was going to be patient with her, and he was patient."

Varenka is by Ghostzapper out of a Dynaformer mare, and, ironically, Regal Glory is by Animal Kingdom, who was trained by Motion to win the Kentucky Derby in 2011 and the Dubai World Cup in 2013.

Get of Animal Kingdom won three times at Saratoga in two days in a sprint and two turf races.

"I always root for him," said Motion. "I have breeding rights to him, but most of all I want to see the horse do well because I think he's the real thing."

Just as the horses were pulling up after the race, the heavens opened and it began to pour. 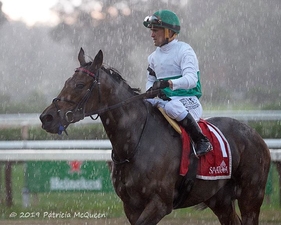 Varenka and Castellano waiting in the rain for the photo to be read (Photo by Patricia McQueen)Varenka and Regal Glory walked in circles outside the winner's circle, their jockeys and handlers getting soaked as thunder and lighting crashed above, seemingly for an eternity, while the judges examined the finish photo.

Motion said he couldn't believe that they were making both horses wait so long in the storm, but finally the dead-heat was announced and the winning photos snapped in record time.

"There's the G1 Queen Elizabeth Stakes at Keeneland, and we have that in the back of our minds as the next race for Varenka," said Motion. "It's the most prestigious race for 3-year-old fillies."

As for always rooting for the get of Animal Kingdom, Motion himself had saddled a 4-year-old gelding by Animal Kingdom in an earlier race on Saratoga's Saturday card.

"Jane Buchanan bought him a a yearling," said Motion.. "He''s a little bit of a late developer, but now he's three for three as a 4-year-old."

Nakamura broke last, moved up to fifth with one mile to go and moved up coming into the stretch to gamely finish a neck in front of Midnight Tea.

In front from the beginning, Sharing floated five wide into the stretch and finished under a hand ride to win by 6 1/4 lengths.

The Md-bred Cordmaker stalked the pace for 6 furlongs, responded readly when entering the stretch and drove clear to win by 1 3/4 lengths.

Stickingtogether sat second behind the pacemaker and drew off under brisk urging to win by 7 lengths.