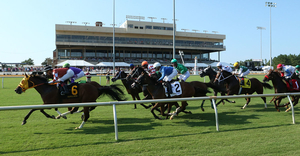 Colonial Downs Racetrack"Bodes Well is a nice horse," said Young. "I got him in the beginning of May. I bought him from Warren Greatrex, a top trainer in England. I've gotten others from him."

"Warren's wife Tessa is a bloodstock agent, and she picks out his horses for him," said Young. "Tessa and I worked together for Jonathan Sheppard in 1998 or '99. We've been friends since then. The ones I get from Warren want quicker ground than they have in England, or they have bled in a race there."

"BODES WELL wasn't very expensive," said Young. "He likes quick ground, and for his price and rating, I thought he was a nice little grab."

Young said the Silverton Hilll had been one of the Young's first owners, but that the owners, Tommy and Bonnie Hamilton, now had all flat horses.

"I called Tommy and Bonnie to ask if they had any flat horses that they thought would make jumpers, and they said that if I found anything they might be interested in a jumper again," said Young. "Bodes Well fit in their budget. They were in Saratoga, and they watched the steeplechase race from their box there. They were excited by the win. It's fun to get them back into jump racing again."

Bodes Well rated mid-pack early on, got through on the inside on the turn, went to the lead over the last fence and went on to win by 1 1/4 length over Taking The Lead Stable's Lead Investor, trained by Sheppard and ridden by Gerard Galligan.

"I bought Moorland out of a Tattersalls sale," said Young of the 6-year-old gelding that first ran in two maiden races in 2017. "He jumped out of a paddock and raced around like a maniac and bowed a tendon. So we gave him a year off."

"He won a maiden claiming race at Middleburg, then he was third in a handicap at Radnor," said Young. "He's out of a stakes mare, and he has two flat siblings that are black type winners."