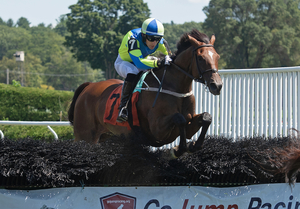 Snap Decision (Photo by Tod Marks)The only race was for second, which was won the Eve Ledyard's Go Get the Basil, trained by Jonathan Sheppard and ridden by Gerard Galligan, who  finished a neck in front of Lee Pokoik's Roller Rolls On, trained by Paul Fout and ridden by Kieran Norris.

Armata Stable's Zanzi Win, trained by Ricky Hendriks and ridden by Ross Geraghty, despite being under a hard hold, set murderously fast fractions and lost the lead to Snap Decision after the eighth and last fence and tired to finish fourth while the other Fisher trainee, Whitman's Poetry, fell at the third fence and Tomgarrow, Renown and Gaye Breeze were distanced and pulled up.

"They set it up for us," said Fisher. "The pace was ridiculous. But that's fine by me."

SNAP DECISION, by Hard Spun out of Salute, by Unbridled, was bred by Phipps Stable and, trained by Shug McGaughey, won a Maiden Special Weight at Gulfstream on Jan. 28, 2017 but then only won one more race, an allowance optional claiming at Belmont in July and then ran throughout 2018 in allowance and stakes races but only hit the board once, on Nov. 28 at Aqueduct.

Bruton Street-US, the partnership of Charlie Fenwick, Mike Hankin and Charlie Noell, bought the 5-year-old gelding soon after that race.

Doc Cebu, bought by Fenwick after a poor showing on the flat, turned into a champion timber race horses, and he is also by Hard Spun, which influenced the partnerships' purchase of Snap Decison.

"I had a conversation years ago about what you should do when you buy a horse out of someone's barn," said Fisher.

Fisher said that sending doughnut was just a nice thing to do so that McGaughey's barn would have good feelings about the barn that got the horse from them.

"I also sent a text to Shug, but he didn't answer me," said Fisher.

"Snap Decision will go to Belmont for the novice race," said Fisher. "Moscato (GB) and Scorpiancer will go in the Lonesome Glory."