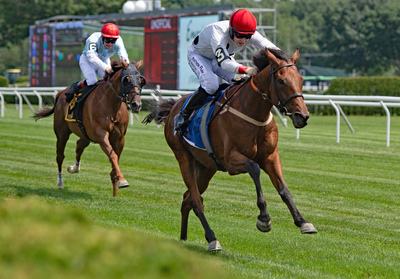 Winston C leads Vosne Romanee to the wire in the Smithwick (Photo by Tod Marks)"That was very nice," said Sheppard, who won the Smithwick for the sixth time. "He probably had a little left in reserve at the wire.

"Winston is a quicker horse than most of those from Europe," said Sheppard. "That's I recomended him to Ed Swyer (owner of Hudon River Farms).

"ED OWNED Nine Pins," said Sheppard. "He's a prominent businessman in Albany. He has a cottage near Saratoga, so this is his home track." 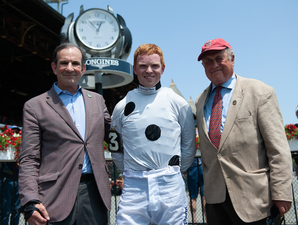 "Winston only arrived here at the end of April, and he went straight to Nashville just 13 days later, where he finished third, just beaten, in the Novice Stakes.," said Sheppard.

"He has had a hard season in England, and when he arrived her he was ribby, and his coat wasn't good," said Sheppard. "We thought after that good effort at Nashvile that with a little rest he might be competitive, and he proved that today."

Winston C, was second-last at the second to last fence on the backside but made a hard charge around the final turn, going four-wide to take command.

Winston C held the edge in the stretch with Vosne Romanee challenging from the outside, but he surged to the wire, extending away to hit the wire in 3:45.99 to get the win.

"That was great. A great way to start the meet," Sheppard said. "You always feel a little bit of pressure every year. We've had a quite a few good years up here, but every year is a new challenge and it's nice to get that monkey off our back. The jock gave him a great ride and the horse ran well. "

The 5-year-old Rip Van Winkle gelding was coming off a third-place finish in the Marcellus Frost Champion Hurdle on May 11 at Percy Warner in his North American debut after posting a 5-1-5 record in his first 17 starts in England.

"I'm not going to say I expected that flat run from him, but I hoped for it," Sheppard said. "He's a little quicker than the average European steeplechase type. He ran well in his last race at Iroquois in Nashville. Having that race under his belt certainly helped him."

Since switching to jumps, Winston C is 4-0-2 in seven starts, with Garner aboard for both of his races in the United States.

"We had it planned in our head that we were going to line up halfway down the field," Garner said. "It didn't quite go to plan. We didn't get the best of starts and went a really, really quick gallop for the first mile. My lad didn't go as well as I hoped, he wasn't jumping.

"I just wanted to get him in the rhythm and make sure he was doing his job properly, so I took a pull on him," he said. "I got his confidence going and got him back jumping. He's a very good horse. He went four or five-wide because I had no choice and I swung into the straight and he just kept going. He's a really nice horse and one for the future."

Vosne Romanee, the 8-year-old veteran making his 51st career start, finished three-quarters of a length ahead of 33-1 Hinterland for second.

Show Court, the winner of last year's A.P. Smithwick, was pulled up in the stretch and vanned off.