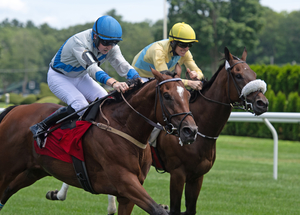 Redicean, left, nips Arch My Boy in Jonathan Kiser Novice Stakes (Photo by Tod Marks)In his first start in this country, Redicean ran mid-pack for most of the 2 1/16 mile race, raced off the rail on the final turn, swung seven wide into the stretch and closed strongly to get the lead at the eighth pole.

Redicean battled with runner-up Arch My Boy, owned by Mrs. George Ohrstrom, trained by Richard Valentine and ridden by  Kieran Norris, in the last furlong and won by 3/4 lengths in 3:48.05 under a strong ride.

Virginia Lazenby Racing Stable's Help From Heaven, trained by Kate Dalton and ridden by Ross Geraghty, was third in the nine horse field.

Redicean''s last start was April 13 in Ayr, Scotland, in the CPMS Scottish Champion Hurdle, in which he place 11th.

IN 22 STARTS in England and Scotland, Redicean won seven times, mostly in handicaps, with one second and two thirds.

Young also has the morning line favorite in the G1, $150,000 A.P. Smithwick, Bedrock, who is another first time starter in this country.

Owned by Irvin Naylor and ridden by Sean McMermott, Bedrock is making his first start this year after back-to-back stakes wins in Ireland for trainer Iain Jardine last year.

Naylor also has Sempre Medici, trained by Cyril Murphy and ridden by Darren Nagle, in the Smithwick as a very strong entry.