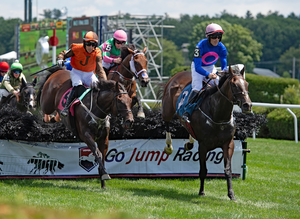 Cite left, and Repeat Repeat over the fifth fence (Photo by Tod Marks)That race was originally scheduled for Wednesday, July 17 but was rescheduled for Sunday after it was cancelled due to a downpour that struck even as the horses were in the paddock.

Cite, ridden by  Willie McCarthy, led for most of the race and held off Bon Nouvel Chasers' Repeat Repeat, trained by Julie Gomena, for the win, and Petticoats Loose Farm's Gaye Breeze, trained by Meriweather Morris and ridden by  Tom Garner, was third.

Cite, who was an allowance winner on the flat, won his second race over fences after winning a maiden special weight at Percy Werner last year.

THE HEAVY favorite, Rosbrian Farm's Markhan, trained by Ricky Hendriks and ridden by Ross Geraghty, finished last of the six finishers after having his heels clipped twice and suffering deep cuts behind.

Whitman's Poetry, also trained by Fisher, clipped heels with Markhan after fence five and lost his jockey, Mike Mitchell, and then fell at fence seven, recovered quickly and was caught by an outrider.

"Markhan cut his leg pretty badly, but luckily it didn't cut any ligaments," said Hendriks. "He's at the clinic now. Whitman's Poetry clipped heels first, and then Sean McMermott's horse jumped into him."

McDermott was riding Roller Rolls On, who finished fourth.

George Mahoney, ownerof Rosbrian Farm, and Hendriks, who were on top of the world last year with two top horses, has suffered a run of very bad luck this year.

Not only has the very promising Markhan lost time training, but Hendriks has also lost one of his top horses, Optimus Prime, who suffered a tear in his suspensary while training and is out for the year.

Zanjabeel, last year's Eclipse Award winner, is on the comeback trail, according to Hendriks, and is pointed towards the Lonesome Glory at Belmont later in the season.