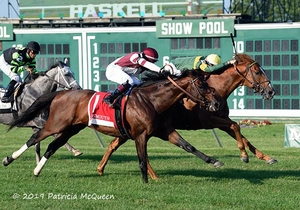 Just Howard winning the Oceanport Stakes (Photo by Patricia McQueen)Just Howard, ridden by Trevor McCarthy, settled off the pace, raced three wide past the qurter pole and dug in gamely to win by a nose.

"He's been a hard knocking horse," said Motion. "He's improved this year. He's very brave and very honest. I'm so glad he got the win."

"He got a good ride on a very strange day," said Motion, commenting on the fact that Monmouth cancelled all but the six stakes races and ran those races beginning at 6 p.m. to avoid the heat of the day.

Racing was cancelled at Saratoga and Parx due to the heat, but Monmouth had originally planned to hold its races as usual as the track is usually cooler due to its proximity to the ocean.

The heat and heat index at Monmouth on Saturday, July 20 were not any higher than on other days when races were held.

With the Haskell scheduled for that day, Monmouth usually has its biggest handle of the year and might suffer greatly if postponing the races caused a lower than expected handle.

"I wasn't aware of PETA's protest," said Motion. "But it's a shame to have racing governed by PETA."

This was Just Howard's fourth stakes win, having won the Caveat Stakes, the Find Stakes and the Commonwealth Derby, all at Laurel, in 2017.

In 2018, Just Howard, who was bred by Howard M. Bender, placed third, fourth and fifth in stakes, and earlier this year he was third in both the G2 Dixie Stakes at Pimlico and the Prince George's County Stakes at Laurel. 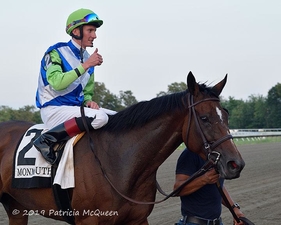 I'm So Fancy, trained by  Arnaud Delacour and ridden by McCarthy, led the scratched down field of three the entire race and held on to win by a neck.

He's No Lemon ran last early, moved up on the far turn, swung four wide into the stretch and closed fast to win by  1 1/2 lengths.

Friend Me Charlie saved ground early and drew away to win by  5 1/2 lengths but returned bleeding.

Catalina Cruiser, whose sire was bred by Phyllis Wyeth, led the entire race and won by 1 length in 1:44.20.

Catalina Cruiser has now won six of his seven starts, including four stakes, and has career earnings of $571,100.