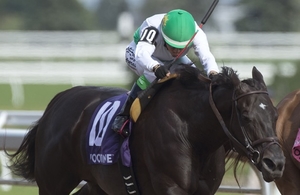 Pamina wins the 2019 Ontario Matron Dickinson, whose Tapeta Farm in North East has two turf and two Tapeta tracks, has trained the 4-year-old mare since she was a 2-year-old, and this is her fourth win from 10 starts and her first stakes victory.

"Two weeks ago, Pamina had a breeze that didn't go so well," said Dickinson. "That gave us a bit of a scare, and I didn't know whether to send her all the way to Canada if she wasn't right, so I gave her one more breeze."

"My exercise riders are Adam Davidson and Fiona Fox," said Dickinson. "I put them under pressure. I told them they had to decide if she was ready to go to Canada, and they said `Absolutely send her'. So they were a little nervous at the start, but they were sure she was going to do well."

Augustin Stable is owned by George Strawbridge, and Dickinson said he and his wife Julia have three horses with him.

"I HAVE Lift Up and Theodora B as well as Pamina," said Dickinson. "They're fantastic to train. They're all tryers. In the winter, they go back to the Strawbridges' farm where they're turned out in a 120 acre field with 10 or 12 other horses. So they run around, and they come back bigger, stronger and sounder than ever."

By Street Cry  (Ire) out of Pamona Ball, by Perfectly Pleasant, Pamina won a maiden special weigh tin 2017, in 2018 she won an allowance race and placed second in the G3 Pucker Up Stakes at Arlington, and this year she won an allowance prior to winning the Ontario Matron, and she now has career earnings of $189,271.

Dickinson said he was looking for another graded stakes for her next start.

The Strawbridges had a second winner the next day when Augustin Stable's homebred Vanenka, trained by Graham Motion, won a $92,000 Allowance Optional Claiming race at Saratoga on July 14.

By Ghostzapper put of Dynamic Cat, by Dynaformer, Varenka won the 1 1/16 mile turf race by a neck after swinging five wide into the stretch and digging in gamely for the win at the wire.

Motion also saddled another of Augustin Stable's horse, Tobago, to win a $42,000 Allowance race at Laurel on July 11.

Tobago won the 5 furlong turf race by 3/4 of a length.

Bred by Sheppard and Hudson River Farms, Another Try, by Redeemed out of Let's Canoodle, by Oh Say, won the 6 furlong race by 3 lengths.

Veneer of Charm saved ground at the back of the pack around the first turn, advanced through the back stretch, swung three wide into the stretch, drove to the lead through the stretch and won under a mild drive.

Roses for Ruby, a pa-bred by Great Notion out of Sack of Rubies, by Unbridled Jet, won the 5 furlong turf race by a nose.