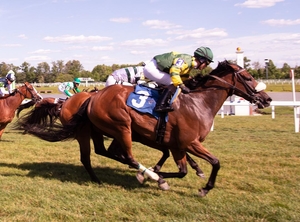 Dendrobia (Photo by trkphoto)Bred by Mr. and Mrs. Charles McGinnes, owned by Cynthia R. McGinnes and Francis J. Clemens, trained by Timothy Keefe and ridden by Forest Boyce, Dendrobia had to move five wide turning into the stretch in the nine horse field, moved up under pressure in mid stretch and kept on determinedly to win by a neck over Ellanation.

Dendrobia, by Denman (Aus) out of Boudicca, by Hard Spun, has now hit the board in eight of her 12 starts with two wins.

"She's by an Australian champion, Denman, but he's not well known here," said McGinnes. "We were in Kentucky looking at stallions, and I just fell in love with him. He's a great big, strong horse, and you don't see many like that in this country. We needed a big stallion to add bone to the mare."

"WE PUT HER in a sale, but she didn't make her reserve, so we kept her to race," said McGinnes. "She definitely wants to run on grass, but last year, every time we entered her, it rained, so she had to run on dirt. She still won $47,000. We kept her in training through November, but every time a race for her came up, it rained."

"We sent her to Betsy Houghton's for the winter, and since she's come back, she won the first race this year, and then ran second in an 5 1/2 furlong allowance at Laurel to a horse that set the course record of 1:00:55," she said. "She looks just like her dad. Her half sister, Misty On Pointe was third in that race. They're half sisters, but you'd never know it. Misty is little and Dendrobia is big. When she was going past Misty, she was taking one stride to Misty's two." 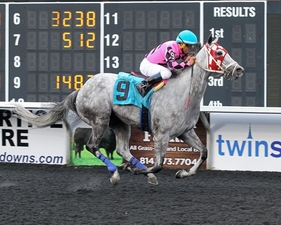 More than Good (Photo by Coady Photography)Hurried out of the gate, More Than Good was three and four wide through the turn, gained steadily through the stretch and drew off late to win comfortably by 2 1/2 lengthsand, ironically, the horse he beat is names Less Than Perfect.

More Than Good, by Macho Uno out of My Mancita, by Mr. Greeley, scored his first stakes win to run his career resume to three firsts, two seconds and three thirds from 22 starts and $169,724.

By Pioneerofthe Nile out of a Rubiano mare, Tobago saved ground through the turn, angled out and drew off to win by 4 3/4 lengths under mild urging.

Last in the five horse field entering the turn, Conducive improved his position through the turn, cut the corner into the stretch, dueled through the stretch with Subdued and won by a head.

Bumped at the start, Trinity raced off the pace, moved up three wide on the turn and won by 1 /34 lengths.

Minnow broke in the air, moved to the lead quickly, drifted wide in the stretch but held on for the win.

Comfy and Cozy moved to the lead soon after the break and extended her lead to win the 3 1/2 lengths.