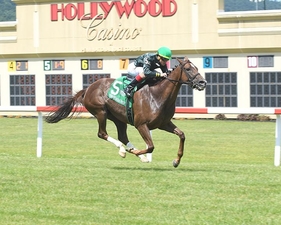 Imply winning the Lyphard Stakes (Photo by B & D Photography)Imply won the 1 1/16 mile turf Stakes for Pa-bred fillies and mares 3 years old and up by 3 3/4 lengths.

"This was a nice spot for her," said Houghton of the 6-year-old mare by E Dubai out of Allude, by Orientate.

"Sometimes we send her to Florida in the winter," said Houghton. "But she's 6 years old, so this could be her last year. She might be retired to be a broodmare."

"SHE'LL RACE next in a stakes at Presque Isle in July, she likes that track, then hopefully in the turf race at Pennsylvania Day at the Races" said Houghton.

In the Lyphard, Imply was rated three wide on the back stretch, began to move forward approaching the turn, quickened around the turn into the stretch and drew out under a hand ride to win by 3 3/4 over Wildcat Cartridge and Smokinpaddylassie.

This was Imply's second consecutive win in the Lyphard Stakes and her third stakes win, running her caeer total to 10 wins, seven seconds and two thirds fom 26 starts and her career earnings to $559,828.

CATALINA CRUISER, by Union Rags, made a triumphant return to the races, just missing setting a new track record, with a stirring stretch run to win the G2, $250,000 True North on Friday at Belmont Park, one of five stakes races on the second day of the Belmont Stakes Racing Festival. 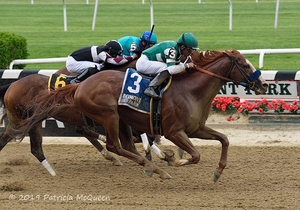 Catalina Cruiser (Photo by Patricia McQueen)Sent off as the 9-5 favorite in a field of eight 4 year olds and up, Catalina Cruiser broke near the back of the pack and settled into third place with Strike Power leading and Recruiting Ready in hot pursuit.

As the two dueled for the lead into the stretch, Catalina Cruiser, under Joel Rosario, closed with a flourish and won by a 1/2 length over Strike Power, with Recruiting Ready a nose back in third.

Hronis Racing's Catalina Cruiser, a 5-year-old son of Union Rags, was making his first start of the year following an impressive 4-year-old season in which he won three in row, including a pair of G2 wins at Del Mar, and then finished a disappointing sixth in the G1 Breeders' Cup Dirt Mile at Churchill Downs on Nov. 3.

Given a long rest by trainer John Sadler, Catalina Cruiser was in fine form once he got rolling after the start.

Strike Power set the pace throughout, clicking off fractions of 22.38 seconds for the first quarter and 44.96 for the half mile.

Catalina Cruiser's winning time for 6 ½ furlongs was 1:14.85 on the fast main track, just .39 seconds off the track record.

"He's a horse that wants to win,'' said Rosario, aboard Catalina Cruiser for the first time. "He wanted to win today. I was very confident in him. He's a nice horse. I just let him be where he wanted to be. He was always comfortable."

With the victory, Catalina Cruiser improved his career record to five wins in six starts.

PETER GIANGIULIO bred Zipper''s Hero, by Partner's Hero out of Open Zipper, by City Zip, who was sold privately to Mario O. Mangini, and she has now won a career total of nine wins, three seconds and four thirds from 27 starts and $412,672, giving Giangiulio considerable breeder's awards.

That's fitting as Giangiulio, as a one time president of the Pennsylvania Horse Breeders Association and many time board member, has been involved in creating and increasing those awards.

Most recently, Zipper's Hero was third in the Penn Ladies Dsh Stakes at Penn National on June 1, but prior to that, she won the Foxy J. G. Stakes at Parx on April 27.

How appropriate was that, as Giangiulio's father bred the race’s namesake, Foxy J G, and campaigned her under the name of his Castle Rock Farm.

Zipper's Hero was awarded last year's top older female title by the Pennsylvania Thoroughbred Horsemen’s Association at Parx Racing after winning the $100,000 Dr. Teresa Garofalo Memorial Stakes at Parx, and three allowance races at Parx as well as an allowance at Laurel