Penn National hosts second round of the MATCH series

Bronx Beauty, winner of the Penn Ladies Dash (Photo by B & D Photography)A strong second-place performance by Jim Reichenberg and Cash is King’s Ms Locust Point in the Penn Ladies Dash (Filly and Mare Sprint—Dirt Division) gave her the series lead by points at 17 given her victory in the first round at Laurel Park on April 20.

Robert Bone’s Completed Pass, second in the Pennsylvania Governor’s Cup (3-Year-Olds and Up Sprint—Turf Division), also was second in the first leg at Laurel, so he now has 14 points and leads his division.

Hillside Equestrian Meadows’ Laki, also a winner at Laurel, finished a troubled fourth in the Chocolatetown Sprint (3-Year-Olds and Up Sprint—Dirt Division) and has the third-highest total of 13 points in the series thus far.

The MATCH Series once again was part of the big Penn Mile program at Penn National, which offered eight stakes on a 12-race program.

The program generated total pari-mutuel handle of $3,685,653, the second-highest in the history of the track.

Pennsylvania-bred Bronx Beauty, who was undefeated in three previous starts at Penn National, slipped away at 11-1 in competitive field and capitalized on a perfect trip to win by 1 ½ lengths over favored Ms Locust Point.

The 4-year-old Liaison filly covered the six furlongs in 1:08.57, very close to the track record.

Manuel Franco, who was in from New York for multiple mounts, rode Bronx Beauty for trainer Anthony Margotta Jr., who has her stabled at Monmouth Park. Her owners,

“Last time she tripped coming out of the gate,” Richard Woll said. “She doesn’t need to the lead but she likes to be close, and Manny put her there. He’s a Class A rider. This is a dream come true. Tony (Margotta) has changed his life around, and he believes in what he says. He’s a good guy.”

Woll said he expects Bronx Beauty, now six-for-11 in her career, will point to the Dashing Beauty Stakes at Delaware Park July 13 for the third leg of her MATCH Series division., and the plan is for her to race in the series at Monmouth, which will hold the final leg.

“This is more about the excitement than the money,” Woll said. 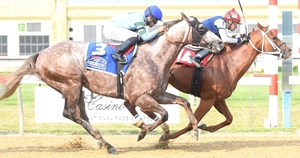 MidtowncharliebrownUptowncharlybrown Stud President Bob Hutt was fairly confident his two starters in the six-furlong stakes, who are full Pa-bred brothers by Uptowncharlybrown, would turn in honest performances., and he ended up with a win and third and a bunch of very happy partners.

Also owned by his breeder, Godric LLC, Midtowncharlybrown took quick command in the Chocolatetown under Roberto Rosado and, as he did in the Fabulous Strike Stakes at Penn National last fall, wouldn’t let the competition pass him to hold on by a neck over the stalking Killybegs Captain in 1:08.83 as the 9-5 second choice.

His full brother, Midnightcharly, checked in third, while Laki was fourth after a slow start and traffic woes during the race.

“He loves this track,” said Hutt of Midtowncharlybrown , who now has six wins and a second in seven Penn National starts. “It’s too bad we can’t pick up the Penn National track and take it everywhere. And (Parx Racing-based trainer Eddie Coletti Jr.) has a done an unbelievable job. This is just fantastic.”

Coletti said the connections probably will “wait for Parx,” the fourth stop in the MATCH Series, “but we’ll see how he comes out of this race and start from there.” 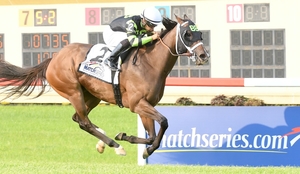 DynatailBallybrit Stable’s Dynatail shipped to Penn National in 2017 and captured the Penn Oaks in her only local outing beforel the Susquehanna, which she won by two lengths over Enchanted Ghost in 1:46.12 for 1 1/16 miles on a turf course rating yielding.

Trained by Michael Dini and ridden by Luis Saez, the 5-year-old Hightail mare rebounded from a fifth-place finish in the G3 Gallorette Stakes at Pimlico Race Course.

She has been based at Monmouth after wintering in Florida.

It marked the second consecutive race in which Enchanted Ghost encountered trouble.

She stumbled at the start in the Dahlia Stakes, the first leg of the MATCH Series at Laurel, and in the Susquehanna encountered traffic trouble as the field bunched up entering the stretch.

Despite that, she is tied with Dynatail and Secret Message at the top of the divisional standings. 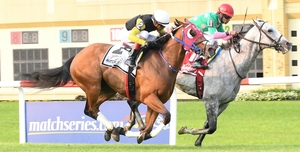 Pure SensationJockey Kendrick Carmouche has ridden the 8-year-old Zensational gelding Pure Sensation many times, and he said he knew if the veteran got the early lead in the five-furlong grass stakes, he would prove hard to catch.

That was the case for the heavy favorite. Pure Sensation, owned and bred by Patricia Generazio and a winner of more than $1.6 million, who held off a determined Completed Pass by neck to win in :58.03 with Nice Tune finishing third.

“He knows his job,” Carmouche said. “He’s a fighter. I just had to put him on the lead. It’s always good to get on my boy.”

“He’s always straightforward,” he said. “He loves his job, and what’s good about him is once he gets his neck to the front, he’s hard to come by. He’s good to us, just take care of him and he’ll show it on the racetrack.”

Delaware Park is up next in the MATCH Series July 13, followed by Parx Sept. 2 and Monmouth Sept. 28.