GRANTVILLE, Pa--Call Paul, bred by Beezie Patterson and Vicky Schowe in Pennsylvania, was impressive in winning the $100,000 Danzig Stakes for 3-year-old  Pa-breds at Penn National on June 1. 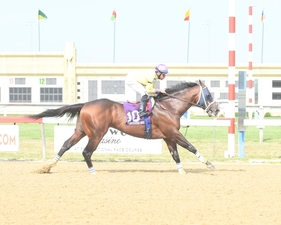 Call Paul winning the Danzig Stakes (Photo by B & D Photography)Patterson and Schowe, with Marshall Silverman as agent, sold Call Paul, by Friesdan Fire out of Anani Force, by Forestry, as a yearling to Grassroots Training & Sales for $20,000, and Grassroots resold him as a 2-year-old for $210,000 to Mike Dubb, his present owner along with David Simon, Bethlehem Stables LLC and Bruce Irom.

Call Paul won the six furlong race by six lengths under a hand ride for his fourth stakes win.

"We were there," said Patterson, who split the Pa-bred breeders award of $11,500 with Schowe.

This was the second Pa-bred breeders award Patterson and Schowe received, having split the $12,000 breeders award when Call Pall won the Pennsylvania Nursery Stakes at Parx last December.

PATTERSON and Schowe still have Call Paul's dam, and she continues to produce for them.

"We sold his 2-year-old half-sister by El Padrino," said Patterson. "Her name in Pink Caddy, and she's at Parx, trained by Randy Allen, and they love her."

"His yearling half-brother by Bullsbay is with Marshall Silverman to be sold this fall," said Patterson. "Avani Force has an Uncle Lino colt by her side, and she's in foal to Tapizar.

MOTION, who trains at Fair Hill, saddled Madaket Stables' Secret Message to win the G2 $175,000 Nassau Stake for Fillies and Mares 3 year olds and up at Woodbine on May 26.

Secret Messge, by Hat Trick out of a Gone West mare, won the 1 mile turf race by 3/4 length .

She raced mid-pack early in the race, was two and three wide through the turn, found a clear path to close steadily and got up late under a drive.

Houghton saddled two winners bred by his mother Betsy Houghton at her Sylmar Farm in Christiana.

Amigos Tune, by Orientate out of Mint's Spirit, by Eastern Daydream, who is also owned by Sylmar Farm, won a $30,352, 5 furlong Maiden Special Weight  by 2 1/4 lengths at Penn National on May 23.