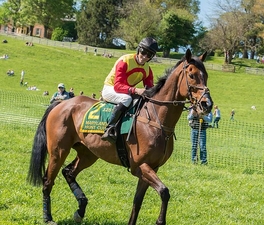 Senior Senator (Photo by Isabel Kurek)It didn't look possible that Senior Senator could keep from going down completely when he slipped on the mulch-covered road, nor did it seem possible that Eric Poretz could stay on him, but somehow Irvin L. Crawford's Pa-bred 9-year-old stayed up and Poretz stayed on.

"He completely disappeared in a cloud of dust," said his trainer Joe Davies. "Then he rose up proverbially from the ashes and took aim at the leader. There was never a doubt that he wold win when he got in stride."

"I didn't have a plan going into the race," said Poretz. "I just feel it out. I ended up in front. I didn't want to be there, but we just jumped around. At the 19th, we got passed by Drift Society and Hadden Frost. I was just trying to cruise behind him, waiting. I knew I had a lot of horse left."

"At the road crossing, we were on the ground and then we were up," said Poretz, who said he had watched the rerun to see what happened. "He has a very powerful push off with his hind legs. Crossing the road, his front legs were up in the air and fully extended, so he was pushing off with his hind legs when his front end was up in the air. His back  legs slipped out behind him."

"AFTER HE slipped, I saw we were about 7 or 8 lengths behind," said Poretz. "We had lost a bit of momentum, but he wasn't slowing down. He wasn't waiting for me. I waited to see he was okay. Then every stride, we were getting closer." 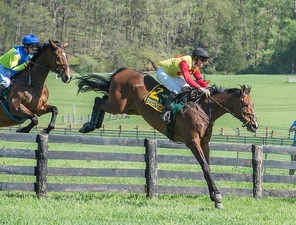 "I saw a spot, and he saw the spot, so I just lifted my chest and said `Let's go,'" said Poretz. "He's a wonderful ride to be on in a race if he's not losing his mind. He's a tricky horse."

"He was a gentleman saddling in the paddock," said Davies. "He seemed to be in great form. the pre-race was uneventful"

When he first started racing over timber, Senior Senator was so unruly that he couldn't be saddled in the paddock. He had to be kept far away from the other horses and Davies had to throw Poretz up and  let them go off bucking.

"He had a perfect trip around the course, and Eric rode a perfect trip." said Davies. "I was pleased to see a challenger come to him at the 19th. He measured all his fences so nicely."

"The ground on the landing at the seventh fence was very soft," said Davies. "We were a little concerned about the landing there."

Senior Senator did just stumble slightly on landing there but stayed up and went on.

"I was thinking back over his flat races," said Davies. "In his first race at Penn National, he was distanced by the field, and at Timonium he beat just one horse."

Davies said it was amazing to see a horse that had such a bad flat racing career and such a young kid do so well.

"Eric was a Pony Club kid from south Maryland," said Davies, "It was amazing to see them come together. Then both were badly hurt in that fall in the Hunt Cup three years ago. To see them both come back is pretty special."

"Eric has tremendous ability," said Davies. "He says he can't feel the reins with gloves on. He even hunts all winter without gloves."

"Senior Senator came out of the race terrific," said Davies. "He could have easily pulled all the muscles on the top of his back."

"For the glimmer of a second, I could see running him in the Gold Cup next week," said Davies. "But I quickly decided he didn't need that. He ran in four races this spring and won all four."

"We have formed a exploratory committee considering running him in the English Grand National," said Davies. ""The question is to do it this year or try to win the Hunt Cup a fourth time and then go."

Senior Senator is claustrophobic, but Davies said he was more worried about his traveling through the narrow English streets in a lorry than flying him over there.

Senior Senator has a donkey that lives with him, and he said they would probably send his donkey with him.

Davies said a number of people had asked him whether he would retire Senior Senator now that he's won the Hunt Cup three times.

"He loves to train," said Davies. "He loves to compete, whether he's in the field or racing. He loves training, he loves the routine. The only race in this country that exhibits his unique talent is the Maryland Hunt Cup. But he has won the Grand National three times."