Paul O'Neill on Carnival Carl with Mark BeecherCarnival Carl and Ivy Hill Stable's Beck's Bad Boy, trained by Alicia Murphy and ridden by Sea McDermott, battled head and head throughout the stretch, with Carnival Carl just edging up to win by a nose at the wire.

"He's a lovely horse," said Beecher. "He won a maiden race at Potomac last year, and then we put him away and hunted him through the winter, Dave;s daughter Hannah won a foxhunter's race on him. He's a great jumper.You might see him at Willowdale in May."

A lot of the day's races were dominated by Hendriks, with Ricky saddling three winners and his son Parker winning two,

Eve Ledyard rode in her first ever hurdle race in the Amateur Apprentice Hurdle, and she won it comfortably on Ricky Hendriks' Morningstar Farm's Indigo Heart, trained by her partner, Hendriks

There were three entries in the race, and Brett Owings on Nancy Roberts' Magical Lemon, trained by Suzie Owings, was second with Elizabeth Scully on her Disobedience, trained by Hendriks, third.

"THE THREE of us discussed it at the start, and we decided I would go to the front," said Ledyard, who did that and never looked back.

"I loved it," said Ledyard. "It was great fun, and it's a lovely course, a great place to learn. I ride this horse a lot at home. Parker won a junior masters chase on him, and Jack Doyle won a race on him at Aiken."

"He gets a different rider every time he runs," said Hendriks.

Hendriks then saddled Debra E. Kachel's That's That, ridden by Ross Geraghty, to win the Maiden Hurdle over a seven horse field.

"We bought her from Graham Motion," said Hendriks. "Ross taught her how to jump. He did a good job. This was a prep for Foxfield."

"She was really nice," said Geraghty. "She was jumping hurdles after two days. She did everything I asked of her today, and she jumped impeccably. She's a nice, big, smart filly."

"We just got him this winter," said Hendriks. "He finished up well. This was his third race, he was third on the flat and second over timber at Shawan Downs." 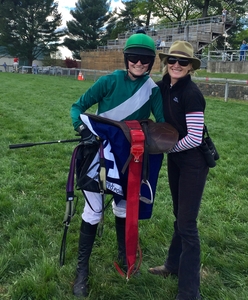 Skylar McKenna and Kathy NeilsonSkylar McKenna rode It's Nothing, owned by Move Up Stable and Sally Reed and trained by her mother Kathy Neilson, to win the Ladies Timber 3 mile race, traveling in the back of the four horse field before moving to the lead on the final turn.

"I'm very fortunate to be riding very nice horses trained by my mother," said McKenna. "This horse loves to take himself out  of the race in the beginning. He's the best horse to gallop. He doesn't even pick up the bridle. He's a good jumper. He's smarter than I am.""

This is McKenna's first season riding in open races after having ridden in a number of junior races,

"My first race, I was so nervous," said McKenna of her first race at Cheshire. "It was my first with an open field. Then I realized my horse was smart and I didn't have to worry."

The Roy Rector Memorial Heavyweight Timber and the Foxhunter Timber, each with two entries, were run together, with John Brophy on Dr. K'eogh, owned and trained by Billy Meister winning the Heavyweight over Mark Beecher on Lucy Goelet's Rocket Star Red.

In the Foxhunter, Parker Hendriks on Stewart Strawbridge's Guts for Garters, trained by his mother Sanna Neilson, won over Julie Nafe on Colin McNeil's Forgotten Knot.

Sanna Neilson and Parker HendriksHendriks tucked in third right behind Beecher, and remained thee for the 3 mile race, obviously making no effort to beat either of the heavyweights in the stretch.

"I knew I could get a good lead from mark," said Hendriks. 'It was always our plan not to try to beat them. This is a great deal better than the field masters chase."

He had also won the Junior Field Masters Chase on Lawn Ranger earlier in the day.

Tommy Houghton won the Small Pony race on Lickety Split, while Taylor Kingsley on Roger that won the Medium Pony and Charlie Marquez on Hot Chocolate won the Large.