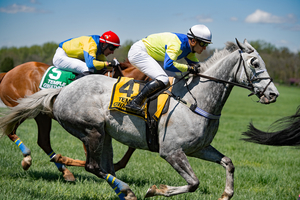 All three horses were ridden by Mike Mitchell.

The 8-year-old Moscato raced in England through 2016 before coming to this country, and he won a Maiden Special Weight at Charlotte on April 29, 2017 and then went on to win an Allowance at Percy Werner in May, the Michael G. Walsh Novice Stakes at Saratoga on Aug. 23 and the Wiliam Entenmann Memorial Hurdle Stakes at Belmont on Sept. 21,2017.

He didn't run in 2018, and the Temple Gwathmey was his first start this year.

MOSCATO won by 3 1/2 lengths over Belisarius, owned by Gary Barber, trained by Kate Dalton and ridden by Bernie Dalton, with another Fisher horse, Jaleo (Ger), ridden by Willie McCarthy, third.

Fisher doesn't normally run horses over timber, but Days of Heaven won the Steeplethon by 1 1/2 lengths.

"He's a really cool horse," said Fisher "He's not quite Grade One material over hurdles, he'd run about fourth in a Grade One, and we don't want to run fourth. He's a cool jumper."

"He's a special needs horse," said Fisher. "He lives out a night with (his wife) Sheila's foxhunter. He's very difficult in the paddock, He can be a maniac in the paddock."

Last year, the race to win the Trainer - Races Won title was very tight, with Ricky Hendriks finishing just one behind Fisher after the final meet, but Fisher seems determined to almost sew up the title during the spring this year.

Sportswear (GB) provided the most exciting finish of the day in the $30,000 Sport of Kings' Maiden Hurdle.

Trained by Jonathan Sheppard, owned by KMSN Stable and ridden by Jack Doyle, Sportwear ran in the back half of the 10 horse field throughout most of the race and appeared out of nowhere to roar by the leaders and win by 2/14 lengths over Rosbrian Farm's Teodoro, trained by Hendriks and ridden by Ross Geraghty.

"He was farther back than I had expected," said Sheppard. "Actually, we really didn't know what to expect. He had run on the flat in a point-to-point, and he lugged in. We put different equipment on him for this race."

"He's well bred," said Sheppard of the 4-year-old gelding by Frankel (GB) out of Casual Look, by Red Ransom. "He's out of an English Oaks winner. We bought him at a horses in training sale or $30,000. He jumped well for his first time over fences."