FAIR HILL, Md.--Fair Hill Point-to-Point on Easter Sunday, April 21 includes all kinds of family activities, an Easter egg hunt and 15 races, starting with pony races for the youngsters and continuing with flat, timber and hurdle races for some of the area's top riders, trainers and horses. 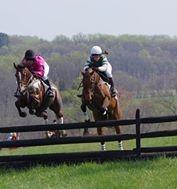 As Fair Hill is the final meet of the Delaware Valley Point-to-Point Association, those riders, trainers and horses will be chasing points to win in their various divisions.

Throughout the team race and the three meets, the outstanding feature has been the familiar names of the up-and-coming juniors who are winning now and will be the future of the sport.

In the Small Pony flat race, which kicks off the festivities at Fair Hill, Thomas Houghton, the son of a top Delaware Valley flat trainer, Bernie Houghton, appears to have the championship almost sewn up on Lickety Split.

IN THE Medium Pony flat race, either Elizabeth Barr, the daughter of thoroughbred race horse owner and former member of Pennsylvania Horse Breeders Association board of directors Betsy Barr, or Teddy Davies, the son of Maryland Hunt Cup winning rider and trainer Joe Davies and Blythe Miller Davies, a former leading rider, could take the championship on Squeak or Count Chocula with a win at Fair Hill.

Parker Hendriks, son of Sanna Neilson, a co-master of Mr. Stewart's Cheshire Foxhounds and past winner of the Maryland Hunt Cup, and Ricky Hendriks, last year's second Leading Trainer, Races Won of the National Steeplechase Association, can take the championship in the Junior Field Masters Chase, Horses, with a win on former Maryland Hunt Cup winner Guts for Garters.

Skylar McKenna, daughter of Kathy Neilson, a top steeplechase trainer, and granddaughter of John McKenna, a former DVA champion rider, has a good chance of winning the Lady Rider Championship.

Skyler is entered in the Lady Rider Timber race, scheduled to start at 2:30, on It's Nothing.

The morning at Fair Hill is devoted to junior races, followed by three flat races begining at noon.