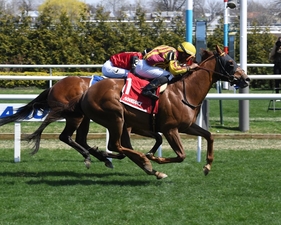 Trained by Graham Motion and ridden by Rajiv Maragh, Regally Irish settled along the rail in third as Skole led, angled off the rail in the stretch and reached the wire a neck in front of Skole, getting his first stakes win in a final running time of 1:10.28.

"HE SETTLED nice off the speed and came up with a powerful run," he said. "I just wanted him to get comfortable early, whether it's up close or behind. He doesn't have a set style, so it gives you a lot of options. The way the race unfolded, I felt like we were tracking in a good spot. I was just hoping he kicked in, and he sure did."

"The ground was pretty good considering how much rain we got. This is the best turf course we have around here," said Maragh. "It's probably one of the best turf courses in the country, so it's always fun to ride on it. It's nice that it can take so much water and still stay together."

Regally Irish previously had a front-running win in an optional claiming turf race on Jan. 11 at Tampa Bay Downs.

Adrian Rolls, assistant to Motion, said he was pleased with the effort from the young and improving colt.

"That was good," said Rolls. "He ran well down at Tampa. We weren't sure it would be on the grass because of the rain, so it was nice that they kept it on. When he got running, Rajiv said he really sprinted away from them. He appeared to be happy with him. We'll have to see how he comes out of this race before deciding a next start."

Bred in New Jersey by his owner, Regally Irish won $55,000 while improving his record to 3-1-1 from seven starts.

WINX, THE incredible Australian mare by Street Cry {Ire}.won her final race to a rousing reception and one that shook Randwick racetrack  to its foundations, as reported in the Thoroughbred Daily News.. 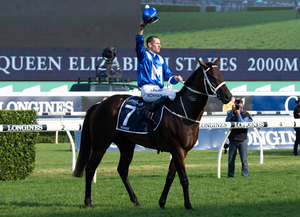 Winx (Horseplace Photos)Winx has been undefeated in her last 33 appearances and has a collection of records that will last for years to come.

She provided everybody with the send-off they hoped for by demolishing her G1 Queen Elizabeth II Stakes rivals.

A sell-out crowd of 42,000 supporters had their dreams fulfilled when Winx finished her racing career with the panache only she could have showcased.

On an emotional afternoon at Randwick, the mare did what she does best – win for fun.

Winx was settled back of midfield and one off the fence by Bowman before he urged her around the field from the 700 meter mark, and they swung widest into the straight.

Winx was clear with 200 meters to run and coasted home a clear winner.

“This is a fairy-tale ending. We weren’t sure we would get that, but how wonderful with that girl,” part-owner Debbie Kepitis said. “She is the most amazing, supreme athlete that I think I’ve ever seen and handled by the most supreme coach. It’s very exciting to have this come to fruition. Congratulations to everybody who has ever been involved with this wonderful mare. The farriers, the dentists and the chiropractors, every person – they all deserve accolades as well.

Co-owner Peter Tighe also paid a special tribute to the conditioning skills of trainer Chris Waller, who celebrated his 100th Group 1 success in the Queen Elizabeth.

“He’s the captain of the team. It’s been really exciting and it’s amazing what it’s all done for racing,” he said.

Winx’s career was one littered with firsts.

She owns a world record 25 Group 1 titles, and her credits include a surely never to be beaten four consecutive G1 Cox Plate victories as well as quartets of wins in the G1 George Ryder S. and the Chipping Norton S.

She has also won the last three Australian Horse of the Year titles.

Saquaro Row, a 4-year-old filly out of Charlie Girl, by Indian Charlie, won  an $81,000 Allowance race at Keeneland on April 11.

She was five wide on the turn entering the stretch in the six furlong race, easily passed the leaders and beat East Moon by 1 3/4 lengths in 1:12.17.

Owned by Newtown Anner Stud and Mark D. Brenner, Saguaro Row is trained by Michael and was ridden by Joel Rosario.

He was rated three wide in the one mile race, was five wide into the stretch and edged away to win b 3/4 lengths over Big Muddy in 1:37.51.

Running firstor second throughout the one mile race, Battle Ready drifted out in the stretch but held on to win by  a head over Patriot Saint in 1:40.57.