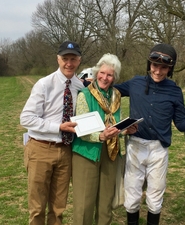 "Hill Tie won the little race at the Grand National last year," said Davies. "He's nominated to run in the Maryland Hunt Cup. Brett Owings was scheduled to ride him here, but he had a fall last week and had a concussion. We're hoping he can come back to ride Hill Tie in the Hunt Cup."

Poretz picked up the ride on Hill tie at Brandywine, but he will ride Senior Senator in the Hunt Cup.

"We have a couple of English riders who might be coming over," said Davies."We like using home grown riders. Luckily we have a whole new group of young riders coming up that looks great."

Davies was referring to the group of youngsters that includes his son Teddy, Skylar Neilson and Parker Hendriks.

BRANDYWINE was dominated by two trainers, Davies and Neilson, each of which trained two winners as well as a number of second and third placed horses..

Rollforward won the John Strawbridge Memorial Trophy awarded to the owner of the horse with the fastest time of the say.

"Rollforward is owned by Charles Noell and my wife, Blythe," said Davies. "He has been plagues by little things - he was hurt in the van.This year we have good horses and good riders. Eric is a great amateur. He just wants to ride and fox hunt. We've had a great weekend with five wins. We appreciate everything we have. If we never win  another race, we've had a great time."

"It was great, she just skipped away," said Neilson.

"My horse jumped really well," said McKenna. "He has a nice turn of foot. I was in behind the entire race and went to the front before the second to last fence. i discussed how to ride the race with my mother. It went the way we'd planned it." 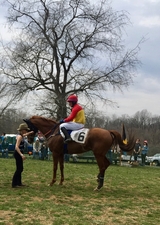 The Foxhunter Timber had only two entries, and Sarah Martin fell off her W W Salty Queen early in the race, leaving Colin McNeil's Forgotten Knot, trained and ridden by Julie Nafe, to finish the winner in 7:24 .

"Forgotten Knot is a Radnor Hunt staff horse," said Nafe. "He's ridden by the whipper-in. This was his first time racing. We lost our lead early, but he just went on nice and bold. I had fun with him."

The Jnior Field Master Race led off the day's racing at noon, with James Wyatt on Thumper winning the Medium Pony section,Maddie Rowland on Bailey winning the Large Pony and Parker Hendriks on Guts For Garters (Ire) winning the Junior Hoorses section,