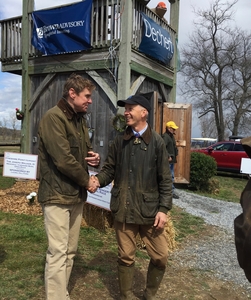 Trained by Joe Davies and ridden by Eric Poretz, Senior Senator won over a small but elite field of contenders in a mini preview of the Maryland Hunt Cup.

At Cheshire, aside from Davies' win, the day belonged to the Neilsons, with Kathy Neilson winning three of the five races, and her sister Sanna winning the fourth.

Senior Senator has won the Hunt Cup twice and his connections are hoping to retire the trophy with a third win on the final weekend in April.

He first won the Hunt Cup in 2016, then fell in 2017 and, although at first he was thought to be okay because he got up and ran back to the barn, a later assessment showed he had broken bones in his neck.

Surgery at New Bolton Center, Davies' good care and months of stall rest had him completely recovered, and, amazingly, he won again in 2018.

"THIS WAS Senior Senator's first race this year," said Davies. "This was the fifth year in a row he's run at Cheshire in the Cheshire Bowl. He was second the first year to Grinding Speed and then he won the next four."

"He's entered at Elkridge-Harford next Saturday, but right now the course is under water from the second fence to the second to last fence," said Davies. "I like to go there because it's our hometown course, plus it's a good prep for the Grand National. The we're hoping to go to the Grand National and then the Hunt Cup, but it's one day at a time with him. He's a challenge."

After his first race at Cheshire, Davies described Senior Senator as "The craziest horse that ever looked through a bridle," and that assessment hasn't changed much.

In the beginning, Senior Senator, who has claustrophobia among other problems, couldn't be taken to the paddock ,but with a lot of work Davies does now take him into the paddock, but he is far from easy.

"There was a moment in the paddock when he got temporarily disconnected from his handlers," said Davies. "He gives us a fright every time he leaves the barn."

The entire layout for Cheshire was revamped this year.

The paddock was moved from that ring down to a spot close to van parking, making it much more convenient for trainers.

The winner's circle was near the finish line, and a nearby tent with food and drinks was open to owners, trainers, riders and subscribers

"The new course is terrific," said Davies. "I loved the new placement of the paddock and scales. The straight up-and-down 3'6" post and rails were a nice change from the more eventing type fences on some courses, and the horses jumped terrific. I loved the uphill finish."

SANNA NEILSON saddled Charles C. Fenwick's recently acquired Royal Ruse to win the Miles Valentine Novice Timber under Gerard Galligan over Irvin Naylor's Jack Slade (Ire), trained by sister Kathy and ridden by Eddie Keating, with Armata Stable Some Response, trained by Davies and ridden by Poretz, who had led at times by as much as 40 lengths, finishing third.

Royal Ruse last won a maiden claiming race over hurdles for trainer Jonathan Sheppard at Montpelier last November in his second start over hurdles after running on the flat at Presque Isle.

"I've had Awesome Adrian since he was 1-year-old," said Kathy. "He's going to My Lady's Manor next."

The Kathee Rengert Memorial Flat race was the first race after the Cheshire Bowl, and it was won by Reed's Handsome Hoyt, trained by Kathy and ridden by Keating.

Kathy's third win, with Sycamore Run and Move Up Stables' Pured It, in the Jill Fanning Memorial was particularly gratifying as Pured it was ridden by her daughter Skyler.

"That was Skylar's first win in open company," said Kathy.

"It was exciting," said Skylar. "I was in mellow company, so I wasn't worried."

Parker Hendriks rode Benevolentdictator, owned and trained by Sanna, to second, and Keating, on ROTA Stable's Montauk Man, trained by Kathy, was third.

The Medium and large Pony races were combined, with Teddy Davies winning the Medium on Count Chocula over Mark Anthony Harley on Betty the Brat, and Joey Dipierro rode Hot Chocolate to win the Large over Parker Hendriks on Mookie Monster and Teddy Davies on Baboo.