CAMDEN, S.C.--With a win by Irvin S. Naylor's Aggressive in the Maiden Hurdle at the Carolina Cup on March 30, Kathy Neilson has three wins from four starts in National Steeplechase sanctioned races to lead in Trainer, Races Won by one race over Jack Fisher and Lillith Boucher with two each and Ricky Hendriks with one win. 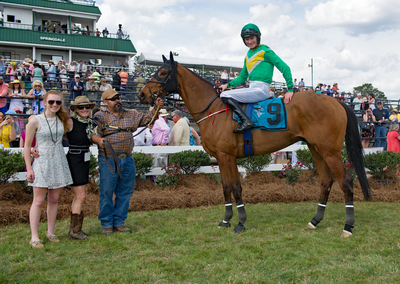 Aggressive with Sean McDermott in the winner's circle  with, from left to right, Skylar McKenna and Kathy Neilson (Photo by Tod Marks)"I've never been on top of the standings after two meets, but ideally that's where to be at the end of the season," said Neilson.

Her first two wins came at Aiken with her own Soluble and Naylor's Change of View.

"Change of View is slated to be a timber horse, but we thought we'd give him one more race over hurdles, and he popped up and won it," said Neilson. He's going to My Lady's Manor next."

"Aggressive is a gorgeous, big horse," said McDermott. "He did really well with the experience he's had. He was learning as he went along today. He's a big horse ,and he wants a big galloping track."

"He came from a  bumper field in Ireland, he didn't jump until he got here," said McDermott. "Kathy did a great job to get him ready this quick."

FISHER has already had six starters, a much faster start than in past years, and he won the $35,000 Allowance Hurdle with Sheila William's Storm Team and the featured $50,000 Carolina Cup with DASH Stable's Ice It, both ridden by Jack Doyle.

Storm Team likes to go to the front, and he did just that in the Allowance race, winning by 3 over Soluble..

"I couldn't hold him most of the way," said Doyle. "He jumped well. I was impressed with him. He's been running in novice races, but he may be in open company now."

"Ice It was very impressive," said Doyle of his win by 6 lengths. "This was his first time in open company. He's obviously improved this year. He jumped super. He made a little mistake at the third last, and that might have knocked the stuffing out of some horses, but he came right back on the bit."

"This was a huge training performance from Jack Fisher," said Doyle. "Jack said this horse never runs well his first time out, so he ran him in a point-to-point first."

Both wins were family affairs, as  Storm Team is owned by Fisher's mother -in-law and Ice it is owned by DASH stable, owned by his wife Sheila and her father, who died last year, the name DASH coming from the first two letters of Dad and Sheila.

Boucher saddle Pamzine to win the $20,000 Maiden Claiming race and Richard Valentine saddled Winner Massagot to win the training flat race, while Hendriks saddled Teodor for his partner and assistant trainer  Eve Ledyard to ride to victory in the amateur training flat.

NSA announced with great fanfare before the opening of the season that all races would be live streamed and very professionally handled, but the live stream for Camden was an absolute mess.

Facebook was filled with complaints for the first hour and a half when no one could get the live stream of either the first or second race.

Then not quite halfway through the Carolina Cup, the live stream went dead, and viewers were treated to rerun after rerun of ads until finally the race was rerun in its entirety.

It was a pretty frustrating afternoon for racing fans.