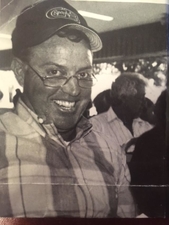 Ronnie HoughtonHe grew up to be a winning steeplechase jockey, then a winning trainer and finally a breeder of many winners. bred, foaled, raised, broken and trained on Sylmar, a farm that he built from the ground up.

He met his wife Betsy in pony club, they married in 1962.

Neither had much money, but through hard work and with their great personalities they built up to an incredible business, and Ronnie leaves a great legacy in his farm, Sylmar, and his business to Betsy and their children, who are carrying on that legacy.

He attended Penn State, where he got a two-year degree, and then went to work for trainer Ridgely White in Virginia.

He also won the Carolina Cup, then a timber race, that same year aboard Ingo.

IT WAS IN September 1961, that Betsy Roosevelt went to the Fair Hill Races, and saw jump jockey Ronnie Houghton win the Cecil County Steeplechase aboard Trout Line.

“I was so proud to know somebody who won a race at Fair Hill,” Betsy said two days after Ronnie died on Sunday, Sept. 23 at age 79.

Houghton bred, owned and trained Thoroughbreds, was a father to four children and a grandfather to 11, and he leaves behind a long legacy and, though he’ll be missed, not a lot of pain. 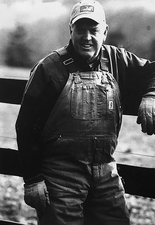 “I’m sad, but I’m great, too,” said Betsy, who married Ronnie a little more than a year after that day at Fair Hill. “He was the luckiest person. He had the three things he always wanted – the farm, me and the kids – everything he ever wanted.”

"We lived just up the road from Sylmar," said Keri Brion Wolfsont, assistant trainer to Hall of Famer Jonathan Sheppard and a steeplechase jockey. "We'd walk up the road to the farm and give carrots to the foals."

"Ronnie gave me a job when I was 10," said Wolfsont, who said she was a horse crazy kid willing to do anything to be near them. "I started by cleaning out buckets and cleaning halters."

"Ronnie got me galloping racehorses when I was 13," she said. "I did a lot of pony racing. I worked there for nine years. The Houghtons are like second parents. I wouldn't be where I am today without them."

"Ronnie was a great guy," said Wolfsont. "He'd do anything for you. While I was working there, my favorite horse was a $5,000 claimer that got claimed. Ronnie followed him for a year and bought him back for me for $1,000."

"After he had his stroke, I tried to go to see him as much as I could," she said. "He will be missed."

"He built that farm from the ground up," said Wolfsont. "He's leaving behind such a legacy. Many jockeys started out at his farm. Briane Slater started there, too. His kids are carrying on his legacy."

"He was an incredibly accomplished horseman, jockey, trainer and farmer," said Cynthia McGinnes, a top Maryland breeder and owner of Thornmar Farm. "But his greatest accomplishment was his family. He'll be missed."

"He had no money when he started, but he just worked hard," said McGinnes. It's amazing what he did by hard work and a great nature."

"Ronnie always gave 110 percent, no matter what he did," said Wendy Hendriks. "He trained horses for Mr. Henry Elser and Mr. Charles Heckin of Detroit. He had a lotof good horses for them. Kip Elser (who is now a bloodstock agent) rode for him."

"All four of us were great friends," said Hendriks, referring to she and her late husband, Dickie, and the Houghtons. "We went on a lot of trips together, out West and to Mexico. Ronnie was always happy."

THE HOUGHTONS, routinely among the leading breeders in Pennsylvania for years, own Sylmar Farm.

The first Sylmar Farm was on Sylmar Road in Rising Sun, Md., and they later moved to Pennsylvania’s Lancaster County.

The 300-acre farm foals mares, raises babies, breaks yearlings, preps racehorses on its racetrack and even finds time and space for 50 head of cattle.

It was Ronnie Houghton’s pride and joy, behind (or alongside) Betsy and the children.

“We try to do a very, very good job,” Ronnie said in 2010 while describing the Sylmar philosophy. “We’ve got a pretty nice reputation. Our clients appreciate what we do for them. We raise a pretty nice, tough individual. Too many horses are what I call hot-house raised.”

There were no delicate flowers at Sylmar, though Princess Of Sylmar grew into a G1-winning, $2 million earner for Sylmar client Ed Stanco.

The Majestic Warrior filly was born and broken at Sylmar – Betsy Houghton walks by her stall every day – and went on to win nine of 15 for trainer Todd Pletcher.

She broke her maiden at Penn National, but pressed on to win the Kentucky Oaks, Coaching Club American Oaks, Alabama and Beldame in 2013.

At the end of it all, she sold for $3.1 million as a broodmare prospect and resides in Japan.

“We liked her, but we never thought she was great,” said Betsy Houghton, who added that Sylmar’s young horses rarely get saddled with high expectations. “We treated her like any other horse and that had to help her grow up. We went to Saratoga and Belmont to see her run, saw her run a lot. It’s still hard to believe.”

By the mid-1960s, Ronnie Houghton was a trainer on the steeplechase circuit and quickly found success, while bouncing from Pennsylvania to South Carolina with a stable of horses.

He won 15 jump races in 1968, placing fourth behind Hall of Famers Mikey Smithwick, Burley Cocks and Mickey Walsh, and ahead of another young trainer Jonathan Sheppard.

In 1970, the year Ronnie and Betsy bought the original Sylmar, a few miles west of Fair Hill near the Pennsylvania/Maryland border, in Maryland, Houghton won 20 races, second only to Sheppard’s 21, including a dozen for main owner Henry Elser.

Early standouts in the barn included The Critter and stakes winner Summer Crop.

By the 1980s, Pala Mountain and Le Sauteur led the way on the steeplechase side, though the stable branched in all directions and topped 30 wins for nine consecutive seasons from 1984 to 1992.

The Houghtons’ son Bernie won the National Steeplechase Association jockey championship in 1985, a year in which Le Sauteur led the earnings list over eventual champion Flatterer.

The son of Super Moment also won the Battlefield Stakes, the Sycamore at Philadelphia Park and Hialeah Turf Cup and placed in four graded stakes on the way to 15 wins, 15 seconds, 14 thirds and $560,666 in earnings.

“He was a real good horse, and Ronnie was proud of what he did,” said Betsy. “Ronnie was a very good horsemen. He loved it. He was extremely successful, but his true love was the cattle and the farm. That’s why we moved here. We had a racetrack in Rising Sun and everything, but we had no room for the cattle.”

Ronnie Houghton’s training business slowed in the 2000s, as Sylmar’s other areas expanded, and Bernie took over in 2005.

Based at Penn National, the younger Houghton won a career-high 78 races, with earnings of more than $2 million, last year and has trained dual Maryland Million winner Crabcakes among others.

Ronnie had a mild stroke four years ago, but was still a regular at regional stallion shows and other events.

A month or so ago, another stroke hit him harder.

He died Sunday, Sept. 23 with his family by his side, eight days shy of his 80th birthday.

“What a life,” said daughter Wendy Kinnamon, who runs a thoroughbred farm just over the hill from Sylmar. “He was a wonderful man; it was tough as hell to be his kid sometimes, but he must have done something right. Look at all of us.”

In addition to Betsy, Bernie and Wendy, survivors include daughter Robin Perry, son Michael (the cattle are his responsibility now), sister Doris Green and 11 grandchildren.