George Strawbridge, Jr., who bred Bricks and Mortar, won his first Eclipse Award for Outstanding Breeder during the Eclipse Award dinner at Gulfstream Park on Jan. 23. 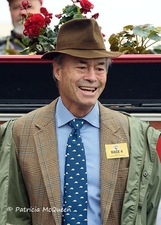 George Strawbridge (Photo by Patricia McQueen)By Giant's Causeway out of Beyond the Waves, by Ocean Crest, Bricks and Mortar was sold by Strawbridge at Keeneland for $200,000.

He was treated for a potentially career-ending case of stringhalt in 2018, but was gradually nursed back to health, and Bricks and Mortar was unbeatable in 2019.

He was the first Horse of the Year for trainer Chad Brown Thursday evening and was also a unanimous winner of the Eclipse Award for older turf male.

Runners bred by Strawbridge won 26 races, good for third overall on the individual breeders list with a total of $7,505,233 in earnings in 2019.

"This is an enormous surprise, a sort of a David and Goliath type of thing," said Strawbridge. "And I have to thank the owners of Bricks and Mortar and the trainer of Bricks and Mortar. What a terrific job they did. Can you imagine giving him a year off because there was a problem? How perceptive is that? Thank you all very much."

BRITISH IDIOM, by Flashback who stands at Diamond B Farm, brought only $40,000 as a Fasig-Tipton October yearling in 2018, but by the time she debuted at Saratoga in August, the chestnut had attracted powerhouse connections in Michael Dubb, The Elkstone Group, Madaket Stables and Bethlehem Stables and trainer Brad Cox.

She won her maiden start by 3 1/2 lengths and then won the GI Darley Alcibiades Stakes on Oct. 4 at Keeneland.

She fought off Donna Veloce in the Breeders' Cup to win by a neck, all but locking up her 2-year-old filly championship.

“What a fantastic year she had," said Stuart Grant of the Elkstone Group. "She is not only fast, but mentally tough, and she is one of the sweetest fillies you could possibly imagine. As much fun as British Idiom has been, it wouldn’t be nearly as much fun without my longtime partners Mike Dubb and Mike Caruso. We have been racing horses together for over a decade. One could not ask for better partners or better human beings. Mike and Mike have done so much for this sport and their communities, it is honor to call them friends and share this honor with them. To my more recent partner Sol Kumin, Sol brings a level of enthusiasm to racing that few can match."