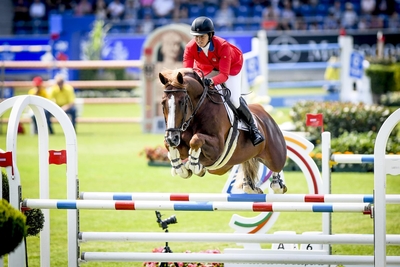 Darry Lou, 2019 International Horse of the Year (Photo by Andrea Evans/US Equestrian)Darry Lou, by Tangelo van de Zuuthoeveout of Venus, by Nabab de Reve, has become a stalwart in the talented lineup of mounts for five-time USEF Equestrian of the Year and Olympic gold medalist Beezie Madden, as the pair have captured numerous international wins since their partnership began in 2017.

The 2019 competition year was highlighted by several historic finishes for Madden and Darry Lou as they capped an exceptionally strong seasonal campaign with back-to-back wins at the prestigious Spruce Meadows ‘Masters’ CSIO5*.

Madden and Darry Lou earned two additional wins during the ‘National’ Tournament at Spruce Meadows in June and produced a double-clear effort for the U.S. Jumping Team during the Nations Cup Aachen CSIO5* competition prior to earning a top-10 finish in the prestigious Grand Prix of Aachen in July.

Their 2019 campaign began at the Winter Equestrian Festival, where they won the $209,000 Marshall & Sterling Grand Prix CSI4* before going on to top the $1 Million Grand Prix in Thermal, Calif., in April.

"The Peagsus Awards was a really fun night because you get to meet a lot of interesting people and hear about their stories, but tonight is honoring the horse," said Madden. "And that's why we're all here and why this entire organization exists. It's reallt special to be able to honor the horse, and I feel really lucky to have sucha talented horse like Darry Lou."

EL PRIMERO was voted National Horse of the Year. 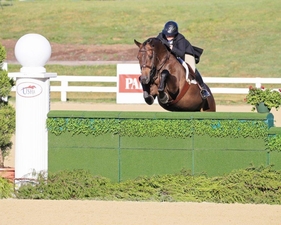 El Primero, by Numero Uno out of Zo-Special, by Indorado, won the 2019 International Hunter Derby Championship, ridden by Victoria Colvin, over a field of 35 entries.

For Colvin, it was her third personal win, but a first for El Primero.

The pair received scores of 92, 94, and 95 and finished nearly 25 points ahead of the second-place finisher with an overall total score of 603 in the year’s most prestigious derby competition.

El Primero has captured numerous derby titles throughout his impressive career, but his first International Hunter Derby Championship win was one to remember, as he collected 26 of 30 handy points and earned an additional 12 points for using the four high options on course.

El Primero is trained by Peggy Gehman and has competed with Sandy Ferrell, Louise Serio and Colvin throughout his career in the United States.

Purchased and imported from Stal Hendrix in 2014, El Primero is a workmanlike and consistent competitor, who enjoys living outdoors in his five-acre pasture at night and has become a beloved member of the Baldwin and Meralex Farm family.

"El Primero has always lived up to his name. His talent and easy way of going made him successful right away," said Serio. "When you have an extraordinary horse and an extraordinary rider like Tori, the magic happens. They're beautiful to watch together."