GREENVILLE, Del.--Bettina Lindsay Jenney, 86, a retired breeder of thoroughbred racehorses, died peacefully at home at Stonegates in Greenville on Dec. 22, 2019, from cancer. 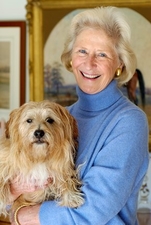 "Marshall was Bettina's second marriage," said Russell Jones, a retired bloodstock agent who was a good friend of the Jenneys. "Bettina was a great hostess. She was very personable."

"She was a stabilizing force for Marshall," said Jones. "She was a great leveler for his highs and lows."

"She wasn't a significant breeder until after Marshall died," said Jones. "But she kept some of Marshall's broodmares and had very good luck with some of them. She just loved it all. She was a great lady."

SHE THEN married Josiah Marvel Scott (Jay) Scott, from Wilmington, Del.,, and lived in Wilmington where they raised their two daughters.

After Marshall died, Bettina managed the farm, and bred the talented racehorse Mrs. Lindsay (named after her mother), winner of top races in France and Canada.

Our family is so grateful for all the caregivers that helped Bettina, especially over this past year.

A memorial service will be held at Christ Church Christiana Hundred, Wilmington, Del., on Jan. 9 at 11am.

Being at her family’s house on Newfound Lake was the highlight of Bettina’s year.

She is survived by her sister, Seton Lindsay O’Reilly of Litchfield, Conn., daughters Lindsay Scott of Wilmington, Del., and Sally Scott of Baltimore, Md., four grandchildren, and one great-grandchild, as well as her stepdaughters Annie Jenney Darrow of Baltimore, Md., and Laura Jenney Roe of Bozeman, Mont., and their five children.