FAIRFIELD, Conn.--The Intercollegiate Horse Shows Association (IHSA), founded in 1967, announced the first inductees, including its founder, for the IHSA Hall of Fame.

Hall of Fame and candidates include people, horses and teams.

Criteria for selection includes outstanding competitive achievement, exceptional contributions to the IHSA, success or significant impact in equestrian sport or the equestrian industry and any other honors.

An induction ceremony will be held during the IHSA board meeting on Saturday, Jan. 4, in Orlando, Florida. 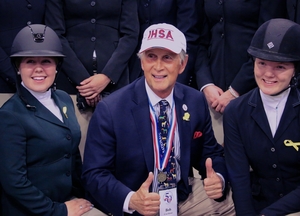 Bob CacchioneWith many as 250,000 men and women that have participated in the IHSA, he has made a profound impact on the equestrian world.

Just 18 and a student at Fairleigh Dickinson University in Teaneck, N. J., when he launched the program, he made the organization his life’s work and passion.

He served as IHSA executive director for over 52 years.

The organization now has over 400 participating colleges and universities and 10,000 members.

BECAUSE THE IHSA offers all levels of competition, from beginner through advanced, and offers college students a way to learn to how to ride, IHSA makes a significant contribution to the grassroots development of the equestrian sports.

Cacchione has been recognized for his commitment to college riding with the IHSA Lifetime Achievement Award, the USHJA Presidents Distinguished Service Award, US Equestrian/EQUUS Foundation Humanitarian Award, a Doctor of Humane Letters from Centenary College and the Equine Industry Vision Award, sponsored by Zoetis and presented by American Horse Publications.

He also serves as vice chairman of the Gentlemen’s Committee of the National Horse Show at the Kentucky Horse Park.

He retired from the executive director position in September 2019 and continues to promote the IHSA and serve as founder emeritus.

JOHN H. “JACK” FRITZ (1925-2012)  was originally from Rockford, Ill., and later from Gladstone, N. J.. Fritz was the equestrian coach of Fairleigh Dickinson Madison, one of two inaugural teams that competed at the first IHSA horse show in 1967. 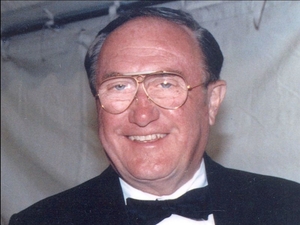 Jack FritzHe served as an adviser and mentor to Cacchione in the early days of the IHSA.

Fritz was a member of the United States Equestrian Team board of directors since the early 1960s, serving as USET vice president for administration and the chief executive officer from 1974-1989.

He served on various committees of the American Horse Shows Association, now U.S. Equestrian Federation, and was a sustaining member of the United States Pony Club since 1955, was named USPC governor in 1960 and in 1961 became a national examiner, a role he held for 30 years.

Fritz dedicated his life to equestrian sports, promoting the IHSA and the greater horse industry.

ELIZABETH “BEEZIE” MADDEN, originally from Milwaukee, Wisc., was the 1984 IHSA Cacchione Cup winner as a member of the Southern Seminary team. 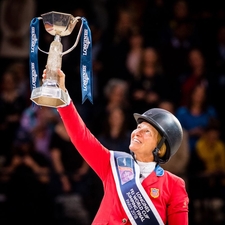 She was the first woman to achieve $1 million in earnings in show jumping.

Madden is an Individual Olympic bronze medalist and was a member of the two gold medal U.S. teams from the 2004 and 2008 Olympic Games, where she rode Authentic.

In 2013, Madden won the FEI World Cup Finals in Gothenburg, Sweden, aboard Simon.

Madden followed up that win with a repeat in 2018 with Breitling LS.

She became the first rider to win the $1 Million AIG HITS Grand Prix in all three locations offered in 2019 with her win with Darry Lou at HITS Thermal.

Madden is one of the greatest riders in U.S. history and continues to deliver consistent wins.

In September, she notched a second win of the CP International Grand Prix, earning the victory gallop of coveted $1 million event with Darry Lou.

Madden, who now bases out of her farm in Cazenovia, N.Y., is a four-time recipient of the U.S. Equestrian Federation’s Equestrian of the Year award.

CLIFFORD, also known as “the big red horse,” was a member of the Cornell University team. 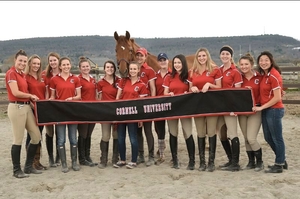 Donated by a client of Gary Duffy, he partnered with various IHSA members to many national titles, including two USEF Cacchione Cup wins.

He competed in nine IHSA National Championships, more than 30 IHSA Regional and regular season shows in flat and jumping classes by riders of every level.

Clifford was the recipient of multiple National Hunter Seat Horse of the Year awards.

OTHER iductees are Sally Batton, who coached Centenary College and was head coach at Dartmount, Cindy Ford, who coached Skidmore College to a record eight national championships, Cindy Morehead, who led Fordham University's Western team to four championships and J.T. Tallon of Lexington, Va. who coached Southern Seminary and Randolph Macon Women's team to four team titles, who received the award posthumously after dying in an automobile accident in 2015.

The IHSA welcomes men and women of all riding levels and offers individual and team competition in hunter seat equitation, Western horsemanship and reining at more than 400 member colleges and universities.

Membership in IHSA means that college students can participate in horse shows regardless of their experience or financial status.

Students compete at eight levels from beginner through advanced with suitable, provided horses, eliminating the expense of horse ownership.

Founded in 1967 by Bob Cacchione, it is the oldest and largest intercollegiate equestrian organization with 10,000 members in 47 states and Canada.

IHSA college and university team participation is represented through a variety of programs including varsity athletics, academic departments and club sports.

Many IHSA teams participate in service projects, giving back to their communities.

Through the IHSA, students enhance their college experience and develop the tools that help build successful careers.