Babington has many visitors in rehab, including his horse Mark Q

MARLTON, N.J.--It was a very busy week for both Kessler Institute and Kevin," said Dianna Babington in an update posted Oct. 1. "I don’t think Kessler knows what’s hit them. There has been a revolving door of friends, many who were in town for the GCT. My greatest thanks for those who took time to visit with us to share memories or to just give Kevin a laugh. He was in great spirits today. 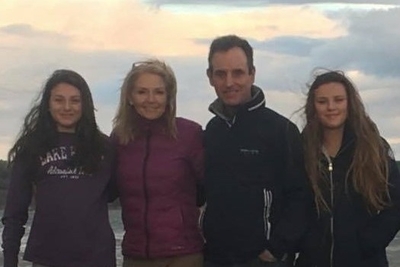 Kevin Babington, Dianna and daughters"It’s been a month since the accident. It seems like years to me. What’s become clear to both of us is that this journey is going to be a long one. That’s torture for two impatient people but both of us have accepted it.

"Many people ask me about the big picture .. but the reality is that there are issues that must resolve before we can tackle the paralysis.

"The last four weeks I felt that I had no footing, like I was scuttling through space. Lost and numb. I don’t pretend to know how Kevin has felt but I have an idea, and he has handled it with strength, class, grace and dignity.

"THE VENTILATOR remains the focus. He has improved his strength since starting at Kessler, and we are moving toward less support daily. He’s getting less concentrated oxygen and less machine generated support. To me that is exciting and positive. He will get off of it eventually I know it. The pneumonia is on its way out and that will be a huge help in that process. The difference in a week has been measurable. He spends hours with no intervention from the respiratory nurses which has been a relief.

"The swelling/ spinal contusion and shock remain a time based recovery with no guarantees but he is optimistic. I am optimistic because I believe in making your own luck and I am looking at options here and overseas.

"Again I want to thank people. People like Oliver and Rachel Kennedy for the support they showed my family this week especially Gwyneth at Capital Challenge. All the people who I was told organized a fund raiser at GCT Grand Prix in New York. Dale Harvey for organizing support from the West coast out of the blue, dame for Susie Hutchison; the list is endless so I will stop as I will surely leave so many people out," said Dianna. "Just please know how happy and thankful we are for everything.

Kevin had a special visitor at rehab on Sept. 29. A very well behaved Mark Q stopped by to show some love and bring his healing powers.
Don't forget, Kevin has a long road ahead. Please be sure to share the gofundme link below.
https://www.gofundme.com/manage/for-kevin-babington-and-family