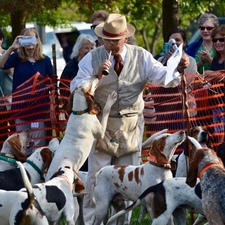 Doc was born in Norristown, Pa., and he began riding horses and foxhunting at the age of 6.

His foxhunting mentors were his father, Clarkson Addis Sr., who was also a veterinarian and huntsman, and Albert Crossan.

He was a graduate of Collegeville-Trappe High school, Ursinus College, and University of Pennsylvania School of Veterinary Medicine, VMD, class of '59.

He was a small and large animal veterinarian and gifted surgeon for 30 years in Lancaster, Berks, and Chester Counties including many Amish and Mennonite communities.

HE WAS A co-founder of the Friends of the Penn-Marydel Hound, co-founder of the Chester County Foxhunters Association, founding director of Green Valley and a member of the Lions Club of Elverson, Natural Land Trust, French and Pickering and the Pennsylvania Fox and Coyote Association.

He appeared on Chester County Day displaying his pack of Penn-Marydel Hounds.

After retiring from veterinary practice in 1989, Addis and his wife traveled to Maryville, Tenn., and over he next year helped establish what is now the Tennessee Valley Hunt.

He also spent time writing letters, articles and two books: A Backward Glance, his memoirs and Our Penn-Marydel Hound, A Historical Anthology.

His daughter Ann Emden is Master at Warwick Village, and his daughter Beth Opitz is huntsman at Thornton Hill Hounds in Virginia.

His son Todd has a small private pack in Maryland.

A memorial service was held on Saturday, Aug. 3 at Old Saint Mary's Church in Elverson, with a reception following at Fox Hill.

Addis is survived by his wife of 63 years, Hampton (Happy) Addis, and children Todd, Ann and Beth, and grandchildren, Jennifer, Hampton, Bennett, Elida, Kemper and Mason.

In lieu of flowers, please donate to the Friends of the Penn-Marydel. C/O Deborah McKechnie, 2061 Miller Rd Chester Springs, PA 19425.