The following article is reprinted from U.S. Eventing Association. 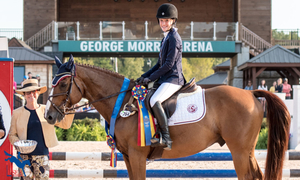 In an interview with The Centre Daily Times, SOEC owner Adam Armstrong said, “Stout was riding her horse, Avant Garde, about 9:20 a.m. when the two were involved in a rotational fall. The horse landed on top of Stout, broke [his] neck and was euthanized.”

Stout was transported by ambulance to Mount Nittany Medical Center, where she was pronounced dead, according to Port Matilda EMS.

Stout joined the USEA in 2016 and had actively been eventing for the last three years.

In 2017, she won the Junior Beginner Novice Under 14 division at the USEA American Eventing Championships riding Deo Volente. The pair finished on their dressage score of 19.8.

STOUT began riding Avant Garde in the spring of 2018 and the pair had zero cross-country penalties in their 15 USEA starts together.

Avant Garde was a 7-year-old Westphalian gelding by A la Carte out of Mensa who evented through the Training level with Holly Payne Caravella before Stout purchased him.

Stout was recently selected to ride on the Area II Young Rider Training Three-Day team traveling to The Event at Rebecca Farm later this month.

She was also planning to groom for the Area II North American Youth Championships (NAYC) team.

The USEA Area II Young Rider program is promoting the use of the hashtag #ride4Ashley in Stout’s memory for the upcoming Championships and beyond.

Stout is survived by her parents, Susan and Craig, and family.

In lieu of flowers, the family requests memorial donations be made to the Area II Young Riders Program in Stout's name.