DEVON, Pa.-McLain Ward, fresh off a smashing victory in the World Cup Finals in Omaha, Neb., will be at the Devon Horse Show and Country Fair, May 25 – June 4, to defend his Devon Leading Open Jumper Rider title. 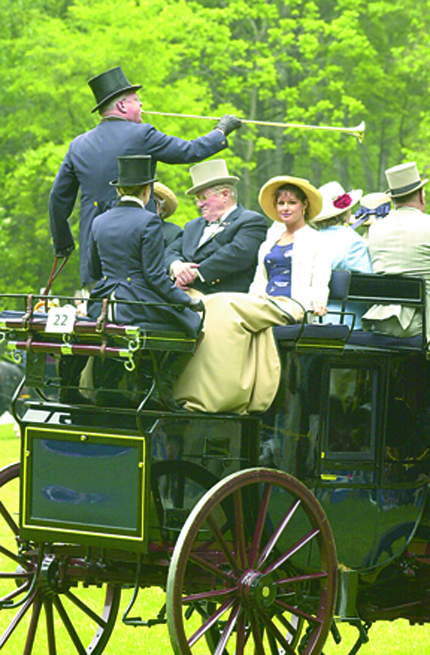 But Ward will face plenty of challengers at Devon, including Laura Chapot of Neshanic Staion, N.J., who has swapped Leading Rider and Open Jumper Championships with Ward over the past years, and Irish Olympian Kevin Babington of Gwynedd Valley, Pa., who rode Mark Q to win last year’s $225,000 Sapphire Grand Prix of Devon.

Ward rode HH Azur to four rounds without a single rail down to win the World Cup against the top riders in the world on April 3.

Chapot was the circuit ending Leading Open Jumper Rider at the Winter Equestrian Festival, and she was also won the Martha Jolicoeur Award for Leading Lady Open Jumper in grand prix classes.

“When I go to Devon I just try to do my best with my horses,” said Chapot. “I don’t think about the other competitors.”

“McLain is always a difficult person to beat,” said Chapot. “He always goes in to win, but I always strive to beat him.”

Ward said that he didn’t know yet which of his horses he will ride at Devon.

"I'm so grateful not only for the horses that I had over the years but for the people behind me," said Ward, who has had many great horses over the years, including the mare Sapphire, for whom the Devon Grand Prix is named.

Devon has continued to make improvements to its facility through the past year.

An additional 80 stalls of the 850 stalls in the permanent stabling have been reconstructed to add to the many that have already been upgraded over the past few years.

Additional men’s and women’s restrooms have been added where the first aid station used to be.

“We’ve doubled the size of the patio in front of Clydesdale Corner,” said show Chairman Wayne W. Grafton. “Spectators can sit on the patio and watch exhibitors warming up.”

“There’s $25,000 worth of new on-site landscaping, and the back gate by the new building has been reconstructed,” Grafton said. “There are two new vendor boutiques, and storm water management has been improved.”

But the biggest new addition, according to Grafton, is that of a $50,000 Arena Eventing competition to be held at 7 o’clock Sunday evening, May 28.

Olympians Phillip Dutton and Boyd Martin helped create the concept of the class, as well as Captain Mark Phillips, who will be the course designer.

Devon’s Arena Eventing features only the cross-country phase, and the course will run through the Gold Ring and the Dixon Oval, with both cross-country and show jumping fences.

Everyone who goes clean in the first competition returns to the jump-off in the Dixon Oval in which time will decide between equal faults.

Competition opens with Junior Weekend, starting with equitation classes on Thursday, May 25 and continuing with junior hunter and jumper and pony classes on Friday and Saturday.

The Carriage Pleasure Drive on Sunday, arriving at the Dixon Oval around 12:30, opens eight days of adult competition.

Hunters compete Monday, Tuesday and Wednesday with side saddle Wednesday afternoon and evening and the $25,000 International Hunter Derby at 12:30 Thursday afternoon.

FEI Open Jumpers begin Tuesday evening at 6:30 with the Welcome Stake and continue with a Speed Stake Wednesday evening and the $225,000 Sapphire Grand Prix of Devon at 8 p.m. Thursday evening.

FEI Open jumpers continue Friday and conclude Saturday evening with the stake and championship, and amateur/owner jumpers are scheduled for Friday and Saturday.

Breeding classes are on Sunday, June 4.

There is a fun Dog Show on Thursday, May 25 at 7 p.m., with sections varying from tricks to walk-trot, jumpers, speed weavers, K9 stakes and the lead line costume parade.

Pony racing is scheduled for Sunday and Monday afternoons, May 28 and 29, and Guy McLean, the Australian trick rider who has performed to great acclaim before at Devon, will show off his prowess at cracking a whip and stand on the back of one horse while guiding four others at the same time, Wednesday through Saturday of adult week.

Devon benefits Bryn Mawr Hospital, and to date has raised over $14,000,000 for the Hospital.