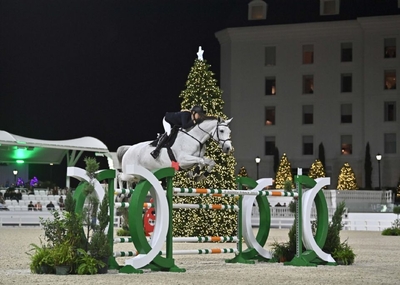 Tracy Fenney on MTM Apple (Photo by Andrew Ryback Photography)“Apple is the best horse," said Fenney. "She’s perfect and tries her heart out for me every time she steps in the ring. This was the most perfect way to end the year and start the winter off on a high note.”

"We planned to do the inside turn after the high option oxer when we walked the course,"said Iwasaki. "Attendu is very handy and excels in the derbies so I knew the turn wasn’t going to be a problem for him.”

“Acajou is a seven-year-old mare that I have owned for almost a year," said Bluman. "She is getting better with each ride. She has a bit of a mare temperament and can be a little tough at times, but she is always clear. She tries her heart out in the ring and is a naturally fast horse. The plan today was to use her carefulness and speed in the jump-off.”

IN OHIO, for the second week in a row, Darby Pease on Carel Van Donderen won the $30,000 WEC – Wilmington Grand Prix.

Rinehart beat a field of 19, crossing the timers at 34.150 seconds to claim the win by two seconds.

“I wanted to be solid," said Hendricks. "The owner wanted me to take the high options to see how he would handle it. I didn’t want to play it too safe so I took a couple of shots. I didn’t do the first big option because I did not want to surprise the young horse. The second jump was so inviting since Joseph Carnicom did such a great job with this course, and Confidant jumped it really great.”