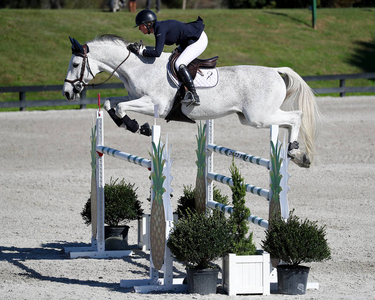 Callan Solem on Horia De Libersort (Photo by ESI Photography)Solem rode Horion De Libersart to win in the four-horse jump-off and placed third on her first mount in the jump-off, Essenar Crixus.

“Horion De Libersart jumps clear basically every class,” said Solem. “He's such a great horse, and I'm so happy to have him. Essenar Crixus is the same – I'm so happy to have him. They're both just such solid characters. Any day you get to ride either one of them is always going to be a good day. They're just such good horses, and it really makes my job easy. I am grateful to Jamie Stryker and Elan Farm to have these horses.”

The jump-off began with a rollback to the first double combination and finished with two tight turns to try and make up speed to the last oxer.

KIRK WEBBY was the first to return with Kaira VD Middelstede, going clean in 39.780 seconds.

Solem was next with Essenar Crixus, but she had the penultimate fence down for 4 faults in 39.658 seconds.

Morgan Ward on Colourful S had the fastest time of 36.812 seconds, but with 8 faults she placed fourth.

Solem, last to go on Horion De Libersart, was clean in 38.565 seconds for the win.

“Kirk went first and did a really nice job; he was tidy everywhere,” said Solem. “Essenar Crixus is maybe a quicker mover, so I went the same track as Kirk, but I made a little bit too short of a turn to the second-to-last jump, and he had that one down, but he jumped great.”

“Horion De Libersart is such a great horse," said Solem. "I went a little neater in a few places, but I've never ridden a horse in a grand prix in a snaffle with no martingale, just one rein. He is such a good horse, such a good mouth, so rideable. That makes the jump-offs a little easier. Even though his foot speed maybe isn’t as fast as some horses, you can go exactly where you want to go all the time – he is really, really smart!”

In October, Solem, who previously rode for Collin McNeil of Chester Springs, Pa., launched her own business that is currently based at HITS Post Time Farm, so winning on home turf was extra special.

“It has been really exciting,” she said. “HITS has been making a lot of improvements. Wordley Martin has been redoing the Grand Prix ring, and HITS has planted so many trees. They’re fixing all the fences. They’ve put in so much work. Everybody is busy around here fixing up all the barns and rings – it's been nice to watch. I think everybody's going to be really happy. I've always loved this property, and I think horses really like it here.”