GENEVA, Switzerland--HH Azur, ridden by McLain Ward, has had a stellar career, including winning the 2017 World Cup Finals and a team silver medal in the 2016 Olympic Games in Rio de Janeiro. 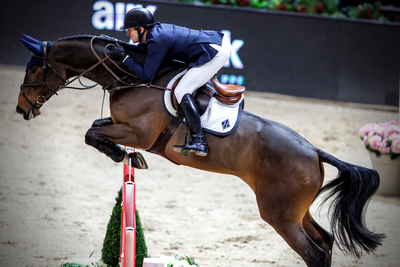 McLain Ward on HH Azur in the Geneva Grand PrixAs HH Azur is now 16, Ward chooses carefully in which competitions to use her.

Ward is the number one ranked show jumper in the U.S., already having won team gold at the Olympics and the World Championships.

On Sunday, Dec. 11, Ward added another milestone to his list of achievements - the victory of the Grand Prix of Geneva with his top mare HH Azur.

On the Friday before the Grand Prix in Geneva, Ward already had a plan to win the 21st Rolex IJRC Top 10 Final on his second top mount, Contagious.

One pole down in the jump-off stopped his speedy round from securing the victory, still earning him fourth place.

Coming back Sunday for the highlight of the CHI Geneve, Ward on HH Azur couldn't be stopped and clinched the gold by 38.43s in the jump-off, beating Switzerland's World Number Two rider Martin Fuchs by an incredible full second and a half.

FUCHS finished second in front of his home crowd on Leone Jei.clean in 39.77s, and Ireland's Shane Sweetnam on James Kann Cruz was third, clean in 40.48s.

In the jump-off, Ward turned back tight to the third fence, an oxer, giving the mare just a stride to see the jump, which she jumped clean, making the sell-out crowd gasp in astonishment.

Following his round, Ward punched the air in victory and then leaned down to hug the mare in appreciation and love.

Next to Calgary, Aachen, and 's-Hertogenbosch, Geneve is one of the legs of the Grand Slam of Showjumping, the most difficult-to-obtain trophies there are in show jumping.

The video of the jump-off is available on https://youtu.be/a4EiTmH5OTA.