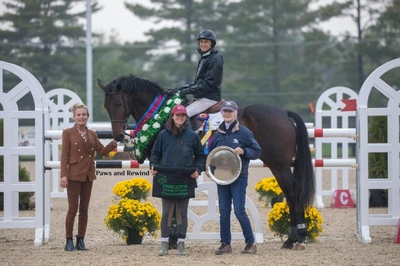 "They're all a little different, but they're all very brave," said Laura. "They were all so good about walking into the ring and letting nothing bother them. They were forward and confident."

"I was pleased that they were so consistent through the three days," said Laura. "With the 5 and 6 year olds, I had hardly ever gone fast with them, and they stepped up like they had been doing it all their lives."

"WE GOT Willow about a month ago from Christian Coyle,"said Mary. "We retired Thornhill Kate, so we were looking for a replacement,and Willow seemed a good fit. Fingers crossed for the future." 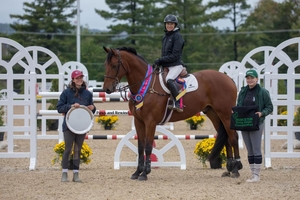 Laura Chapot on Ginola"Ginola's dam's sire is also the sire of Chacun Blue," said Mary. "Somebody from France called Laura and said he thought she would do in America. She's been showing in 6-year-old classes in France, but with a big man. It's quite different to go from a big man to a female, so it takes a while for a horse to get used to the change. We've had her about six months."

"Tyson Fury came last December, just in time to go to Florida," said Mary."We got her from Cian O'Connor. "We showed her very lightly in Florida, but she was still 5-year-old circuit champion. We didn't show her much this summer as she's so young. I don't know why they named her Tyson Fury, because Tyson Fury was a boxer, and she's a mare, but she's by Tyson." 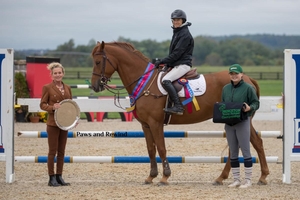 Laura Chapot on Tyson FuryLaura has been hugely successful in Florida, having been circuit champion as leading open jumper rider for over a decade, as well as having consistently won at HITS Saugerties and at Devon Horse Show and Country Fair and at the Devon Fall Classic.

Getting these good young horses positions her to continue her success well into the future.

The fall series at Princeon Show Jumping, a popular venue for exhibitors because of its good footing and attractive fences, continues with the nest two weekends in October.