WELLINGTON, Fla,--The experienced Betsy Steiner of Stockton, N.J., on Bailey’s Swiss W won the FEI Intermediate I Freestyle CDI3*, with a commanding 75.592 percent on March 15 in the final class of the 2020 Festival season. 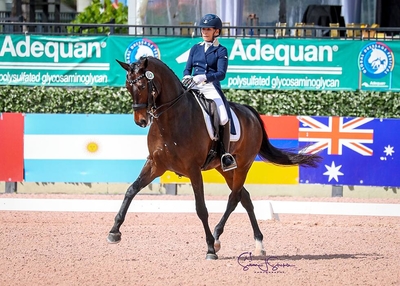 Betsy Steiner on Swiss W (Photo by Susan Stickle)All but one of the 11 starters broke the 70 percent barrier, and U.S. riders filled the top five places in this class.

The 10th week of AGDF and the 2020 season concluded March 15 due to the Coronavirus.

Steiner, who rode for the USA at the 1990 World Equestrian Games in Stockholm, has been coming to AGDF “since the beginning of time,” but this was her first CDI win of the 2020 season.

“I’M AMAZED, but not shocked because she’s truly a wonderful horse,” said Steiner, who is based in New Jersey and runs a training business with her daughter Jessie. “Swiss puts out so much and she loves showing. You can sit back and enjoy the ride and you see her legs coming out in front of you. She’s an amazing horse, she’s my soulmate, and dream horse."

Steiner rode the 13-year-old by Sir Oldenburg to music by Terry Gallo.

“She’s always done all my music and she’s a genius,” she said. “I told Terry that I loved the sky theme music from Outlander, so we incorporated that and added the Celtic music for the trot and a mash-up of Amazing Grace for the pirouettes and Fight Song for the canter. I come down the center line and start the changes as Fight Song comes on and Swiss lights up; the music is fun for her.”

Steiner found the mare accidentally while horse shopping for a client in Munich, Germany, in 2015, and told owner Whitney Bailey that she was too good to pass up.

“She’s been mine ever since,” said Steiner, who is 69. “She’s so intelligent and logical that she’s made me a better person and a better, more thoughtful trainer. She’s super close to grand prix now and she’s great for me at this point in my career. If I would have had her earlier on, she’s so talented I would probably have pushed and pushed her, but now I do it according to what she wants.

“I think she’s going to be my best grand prix horse," said Steiner. "She has everything. She’s drop dead gorgeous, she has the power, she’s got beautiful rhythm, she’s got a great mind and she wants to do the work. I’ve had some wonderful horses, but I think she might be my best so far: the full package.”

The 2020 AGDF season has been an invaluable stepping stone in Steiner and Swiss’s path to the top level, as she has also competed in the national rings, where competition is held every week.

“Global is amazing,” she added. “It’s unique and it offers everything. It really prepares people for big international competition. My horse loves this venue and there’s nothing else like it anywhere.”

Action continued in the big and small Future Challenge qualifier classes, although the final has been postponed from the cancelled week 12 of the 2020 AGDF to the first week of the 2021 AGDF, January 6-10.

The USA’s Sarah Lockman won the Prix St. Georges Future Challenge class of eight starters with 68.456 percent, but as she is already qualified with Balia from week six, the ticket passed down to second place Justin Ridgewell of Canada on Jolene who scored 68.088 percent.

The second ticket to the finals went to the third placed combination of Stewart Underhill riding Deimos 4, who scored 67.132%.

Her own 10-year-old Sir Donnerhall mare has been a prolific winner at AGDF, winning 11 of her 14 CDI starts there in the 2019 season alone.