Steffen Peters wins the Freestyle, making it 11 wins from 11 starts, , after anchoring the U.S. to Nations Cup win 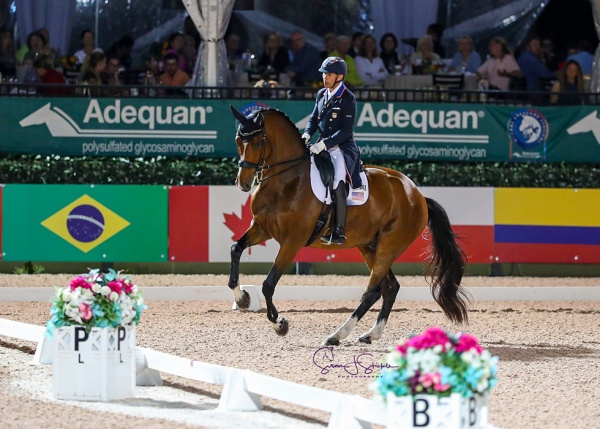 This takes his wins to 11 from 11 starts in this year's Global Dressage Festival, held at Palm Beach International Equestrian Center.

Peters scored 81.535 percent, his second plus-80 percent freestyle score of the year.

The 10th week of AGDF continues through Sunday, March 15, which is also the conclusion of the 2020 season, a decision announced earlier today due to the Coronavirus.

Right behind Peters, personal bests abounded on the podium in the Freestyle.

THE DOMINICAN Republic’s Yvonne Losos de Muñiz smashed her previous best by 2 percent to score 78.91 percent and win the silver medal on her 15-year-old mare Aquamarijn, by United.

Brittany Fraser-Beaulieu of Canada also pulled off a career high, riding All In, a 15-year-old gelding by Tango, to 78.72 percent and win the bronze.

The top five riders in this class all received at least one score of 80 percent from the panel of five judges.

Many of the AGDF riders had planned to head to the World Cup Final in Las Vegas in April, but the show has been cancelled due to the Coronavirus, along with the final two weeks of the AGDF.

“My perception is that we had a hell of a season here preparing, and we are looking forward to future World Cups," said Peters. "‘Mopsie’ is young, and he proved himself here 11 times with 11 wins. Tonight we had a small mistake in the beginning in the two tempis, but the rest of the test was really good, and it excites me so much that this horse actually walks, relaxed in a freestyle, and stands still. It shouldn’t be a big deal, but for him it’s huge as he wouldn’t stand still for a long time. He’s really starting to trust me, and I’m really proud of him. He’s an amazing horse and what a lucky guy I am to get to ride a horse like him.”

“It was a nice class to judge, and I fully agree with Steffen; his horse improved a lot," said judge Christof Umbach. "Today, one of the highlights for me was the walk, and maybe he doesn’t need to hide it away in the freestyle any more. The horse was really relaxed.”

Losos De Muñiz’s Aquamarijn is another who has struggled with the halts in the ring, but much of the work was powerful and impressive.

“I’m so ecstatic at the way she has come around, and after three days to still have so much horse to be able to ride in the ring,” said Losos De Muñiz, who found the mare in Holland four years ago. “Every day she’s getting better. She still has her quirks; we don’t halt. But she still amazes me all the time. When I found her it was that power that made me think, ‘If I can control this, then wow!’. It took me three years, but it’s now amazing.”

Canda’s Fraser Beaulieu, who rode to music by Joost Peters, said: “I had a personal goal to be on the podium, and I’m ecstatic that it happened. All In had so much energy tonight after two mega days of competition; I thought he’d be a bit more tired. This whole show season has been one of the best for me, and I’m extremely thankful for that.”

IN THE UNDER-25 Nations Cup division, Benjamin Ebeling fist-pumped the air at the final halt of the Grand Prix Freestyle CDIOU25.

His ride on Illuster Van De Kampert finished with a piaffe fan in both directions scored 75.13 percent.

It was his best ever score at the level and earned the gold medal, his third of the week.

“In my last piaffe pirouette I could tell it was a good ride," said Ebeling. "I had no mistakes, and I just felt that fist pump. This is my second time riding my freestyle from Karen Robinson. The way she does it makes it easy to follow the music. This week’s been absolutely great. You can really feel that the USA comes together as a real team. Today I was so proud of my horse. It was a good way to finish.”

Ebeling had an unusual introduction to Illuster Van De Kampert.

He was in a coffee shop in New York two years ago, wearing his U.S. Dressage hat, when he was approached by a lady who recognized him and told him she had a horse for him in Wellington.

Later that year, finding himself horseless, he went to try the son of Spielberg.

“He was at David Marcus’ place when he was at Stillpoint Farm,” said Ebeling. “I loved him from the minute I sat on him, and I sent dad the videos, and he was head over heels for the horse. It was an amazing feeling and now we’ve made a deal with the lady I met in the coffee shop and I have the ride on him, which is unbelievable; I’m so blessed.”

All four of the U.S. team members rode in the big tour division, with Peters getting the highest score of 76.085 percent to top the FEI Grand Prix Special CDIO3*.

“It was very close overnight with Canada, just 0.1 percent, so Debbie McDonald and I talked quite a bit, and I believed that going in the ring we should take the intensity from the training in the warm-up into the show arena, not an ounce more, but certainly not an ounce less," said Peters.

“That was the tactic today and it worked out beautifully," said Peters. ‘"Mopsie’ did a very clean test, even more relaxed than any of the other tests he’s done so far. This season was extremely therapeutic for both of us.

“When you’re riding for the team, you always want to put your best test in and this is an exciting format having it over the two days,” Lyle said. “The first day we had some uncharacteristic communication errors, so I really wanted to come out today and put down a strong test for the team and I was happy with his effort.”

Bateson Chandler also improved her score from day one, which was the team’s drop score, on her long-time partner Alcazar.

“I haven’t had a test with as many mistakes as yesterday in quite a while, so it took me a bit by surprise,” she said. “But it was good, because for today it put me back in a high gear again, and realize that I had to push on a bit more.”

Marek was grateful for the experience of riding on a team, something she had never done before.

“I wanted to go out and have a clean ride,” she said. “I was very thankful to be on the team and to get some Nations Cup team experience with awesome teammates. Today I kicked it up a notch and the whole experience has been wonderful.”

“The win today is up there for me,” said 20-year-old Ebeling, who has been on quite a journey with Illuster Van De Kampert. “My favorite thing is riding on a team, so the win yesterday was really important, but for my self-confidence with this horse, today meant a lot."

“The first two times that I did a grand prix with him, we had to retire. He’s such a hot horse and it’s taken me a while to get to know him and to understand how to control him. These last few shows have been really positive for us. I think it’s just been about getting to know my horse better and he’s trusting me more,” he added.

Emma Asher, a former show jumper who was also part of the winning Team USA “Stars and Stripes,” has been building her relationship with Elegance N, having previously ridden a schoolmaster, and she scored 70.051 percent to win the individual silver medal.

“I was surprised by the score; the judges liked it better than I did, which doesn’t happen very often,” said 18-year-old Asher. “But it was really exciting because we’ve had a little bit of a struggle transitioning to this horse from my previous U-25 horse, who was a schoolmaster that did everything perfectly the first time. It was great to break the 70 percent barrier. I’m really glad we have a class like this for upcoming professionals."

The bronze medal went to Canada’s Camille Carier Bergeron who rode the 13-year-old Acoeur, by Acordelli, to 69.692 percent, holding off a challenge from Hope Cooper by just 0.128 percent.Ben Ebeling (Photo by Susan Stickle)