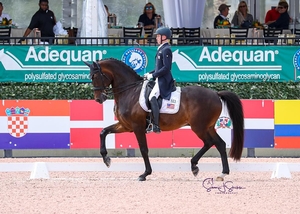 The team finished on 139.559 in the FEI Intermediate II 16-25 test, which determined the team medals.

Ebeling, 20, rode Illuster, a 12-year old gelding by Spielberg, the same sire as Steffen Peters’ Suppenkasper, who was also in action and on sparkling form at AGDF.

EBELING AND Illuster Van De Kampert scored 70 percent, which was the second-highest score in the class which was led by Natalie Pai's score of 70.676 percent from Team USA “Star Spangled.”

“He always lights up a little bit in this arena,” said the 20-year-old Ebeling. “Coming into the arena I could tell this was going to be one of those tests where I’d have to be precise. His passage was really great today ,and I was really pleased with his piaffe; he kept calm in that and maintained his balance. Coming into the walk was a little bit tricky as he’s so hot, but the canter work and the final center line were the highlights.”

Ebeling has ridden on a number of youth teams, including being on the North American Youth Championship junior team in 2017 that won gold.

“It was really cool to have two U.S. teams competing here," said Eberling. "Even though we were competing against each other, we’re all back in the barn having fun and we’ve had team meetings and a team dinner.”

The 18-year-old, who was riding on a team for the first time, said: “I’ve had Elegance since April of last year so he’s relatively new to me. It’s been interesting because before that my horse was very much a schoolmaster and I asked, and things just happened. Today Elegance did not disappoint, and I was really proud of him.”

Of the team experience, she added: “I was a jumper before I rode dressage and I always felt that dressage was an individual sport. With jumping you traveled more as a barn and did things as a team, and I’d felt that dressage was really individual, so it’s been really interesting to get to be on a team and the support has been great. Having the team on the rail was really special and I really enjoyed that.”

“Coming into this week it was a little bit rough because I had the flu last week, so I was just really excited to be able to compete, and Rankrado, who I’ve had for about three years, gave me a lot of good moments," she said. "We had some unfortunate mistakes, but he is quite a hot horse and he’s taught me a lot.”

Team USA “Star Spangled” was made up of class winner Natalie Pai, who rode Utopie d’Ouilly, a Selle Français mare by Quite Easy, to 70.676 percent, Hope Cooper on Hot Chocolate W, 67.235 percent, and Kerrigan Gluch on Vaquero HGF, 65.059 percent.

“I’m very proud of our riders on both U.S. teams," said George Williams, Team USA “Stars and Stripes” chef d’equipe, who is also the U.S. Dressage Youth Coach. "I think it really reflects the programs and what we’ve been trying to do in our whole coaching program and the way we all try to work together. I think these riders are really making tremendous strides; it’s wonderful to see. Terri Kane of Diamante Farms has stepped up to the plate from day one and has been a sponsor of this. I think it’s through programs like that that we’re really able to move forward in these exciting times.”

The senior team CDIO contest is at its mid-way point, with five teams — the USA, Canada, Denmark, Israel, and Japan — battling it out.

Team USA, which consists of Adrienne Lyle, Katherine Bateson Chandler, Anna Marek, and Steffen Peters, sits in a precarious lead, with a current score of 217.131, with Steffen Peters and Suppenkasper posting 75.87 percent in the FEI Grand Prix CDIO3* to put team USA iin the lead.