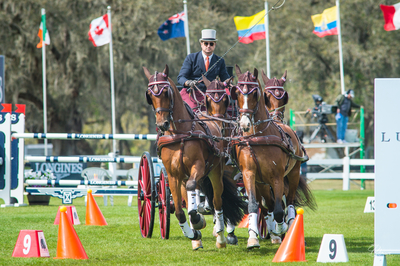 Chester Weber“Number 17 feels nice. It’s always a big goal in my organization to win a national championship and now it’s checked off” said Weber. “This week, I drove two younger horses that came out of my program. Julius on the left and Amadeus on the right wheel. I drove the Marathon team that I’m thinking about for the top sport, it’s the first time I’ve had these two leaders back together and my plan is to keep this team for the rest of the season.”

Weber, the 2018 FEI World Equestrian Games (WEG) team gold and individual silver medalist, opened with a win in the Advanced Four-in-Hand Combined Driving dressage phase on a score of 35.92.

“I’M PLEASED with the performance of my horses," said Weber. "We had some wind out there today. My goal was to remain focused and keep them concentrated on the job,. They stay in our stable on the property as this is home for them but when the tournament moves in, it changes the landscape that they are used to seeing. With tents, spectators and many great sponsor advertisements, it is a lot for the horses to take in and they were fantastic.”

In second place in the FEI Four-in-Hand Combined Driving dressage was Paul Maye with a score of 60.50 ,and Gerben Steenbeek of Canada finished in third.

Jennifer Keeler with her pony Amazing Grace won the FEI Single Pony Dressage with a score of 50.61.

“There is nothing like trotting down centre line at Live Oak International," said Keeler. "Grace was a complete professional today and was delightful. She was brave and went for it on some of the movements and she rose to the task. We are here to defend our National Championship. We have won it the last two years, winning this division here at Live Oak International last year.”

In second place was Rebecca Gutierrez with a score of 56.40.

With a score of 45.84,Suzy Stafford won the FEI Single Horse Dressage with PVF Peace of Mind.

“I almost cried at the end halt; my horse previously had some soundness issues” said Suzy. "It’s been a long road bringing her back and I didn’t expect to be showing here. I started working her and she felt great. She was ready so we came. I’m completely thrilled.”

Winning the Pair Horse was Jacob Arnold with a score of 44.72 and second went to Robert Burrows with a 62.03.

The Pony Pair win went to Katie Whaley with a 56.30 and in second place was Mary Phelps with a 62.63

The Driving Marathon started the day Saturday and didn’t disappoint the sea of spectators that came out and traveled from hazard to hazard to watch the drivers compete.

“The weather cooperated today, and it was a perfect day for the Marathon at Live Oak International” said Weber. “I couldn’t be happier with the performance that my team put in today. It all came together and with the cheers and support of the spectators and sponsors on course, today was extra special.”

Chester Weber had the fastest time across all seven hazards with his team Julius, Amadeus, Boris and Reno finishing with an impressive score of 113.39.

In first place in the FEI Single Horse Marathon was Taylor Bradish with a score of 91.12, and Stafford was second with a score of 93.31, and in third was USA’s Jennifer Thompson with a 97.43.

Keeler won the Single Pony Marathon with a score of 91.40, and Rebecca Gutierrez was second with a 95.31.

ARNOLD on the final day of competition won the Horse Pair Cones with Hermitage Farms owned horses, taking both the Horse Pair and the USEF Advanced Horse Pair National Championship.

“I have three horses here this weekend, all of them by Steve Wilson," said Arnold. "Two of them are a dressage pair that I took to the World Championships last year, but I was very pleased with all of them this week and we had some good strong results. But none of this would have been possible without the support of Steve. It means a lot to get a trophy for him, to get his trophy.”

“Grace really was exceptional this week and she is actually going to be a mother, we have a baby Grace coming via embryo transfer” said Keeler. “Live Oak International has been a great competition for us and we’ll continue to compete together. I'm lucky enough to have a second Advanced level pony, Zeppo, who won the intermediate championship here two years ago. Maybe if the national championships are back again next year, he will get his chance.”

“I couldn’t be more thrilled with this week at Live Oak International” said Stafford. “We didn’t know we’d be ready to compete here and to then win, it really is special.”

“My horse is 10 years old," said Bradish. "She loves the marathon phase and just goes with it which is great. She’s not an easy horse, she makes me work for it for sure.

Bradish won the Grand Oaks CDE earlier this year by a narrow margin, and with this National Championship win she continues to make promising steps towards a place on the US Team this fall.

Katie Whaley is the USEF Advanced Pony Pair National Champion for the fifth consecutive time and winner of the FEI Pony Pair division.

“Live Oak International sets the bar for all of us," said Whaley. "I've competed at here for about 27 years. I'm dating myself, but to watch it evolve is really a highlight of the season for me. I have a young pony in the pair and he did the dressage and he was amazing. The atmosphere in that ring is pretty high, he was really a good boy. I took my ponies on the marathon and cones, and that’s just like a party for me, I love that.”

Going first in the jump off of eight riders, Thieme finished in the fast time of 35.29,

Thieme is a familiar face at Live Oak International having not missed a year since show jumping was introduced at the event, and he went for the win.

“Normally I’m not so quick," he said. "I knew the short turns were going to be the decider today, and Cellisto is in good shape and has promising scope. I knew I was quick, but I was early in the jump off. The incentive of the Leading Rider Award $10,000 award helped. I knew if I had a good ribbon today, I’d be a little closer to that.”

“This is my first show with this horse and this very exciting," said Allen. "He jumped well yesterday, and today the course was lovely. I got close but not close enough.”

“I had a miscommunication with my horse yesterday, but I have a lot of confidence in him and our partnership." she said. "Today was business as usual with him. I could have left out a stride in two of the lines in the jump-off, but I hadn’t seen anyone go before me. I was very happy with him today.”