Young U.S. team dominates the Nations Cup at WEF with a runaway win 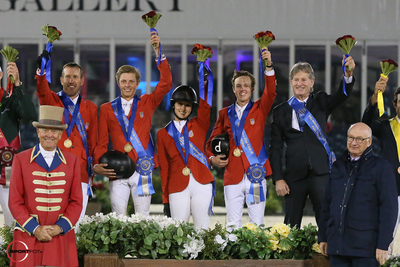 The “Saturday Night Lights” Nations Cup consisted of two rounds over a course set by the USA’s Ken Krome.

AFTER THE FIRST round, each team dropped their highest score, and the top-six teams returned in order of highest to lowest total faults in the second round. 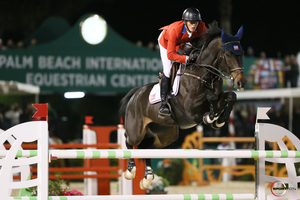 Brian Moggre and MTM Vivre le Reve (Photo by Sportfot)The winner was determined by the lowest total of each team’s top-three riders from each round.

The six teams that returned for the second round included the fault-free United States, Ireland on five faults, Brazil and Canada on a tally of 13 faults apiece and Australia and Israel with 17 faults each.

Sitting pretty on a perfect score after Kocher’s lone time fault served as the drop score from round one, U.S. riders were primed for a win on home soil.

A double-clear performance from 18-year-old Moggre and his 11-year-old Westphalian gelding by Ustinov out of Chello II sealed the victory for his team in his senior Nations Cup debut. 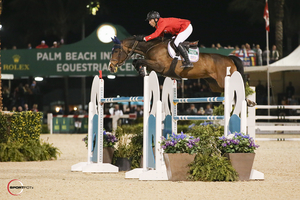 Andy Kocher on Squirt Gun Photo by Sportfot)“Everybody wants to jump clear their first time on the team, so for my horse to make that happen for me, I couldn’t be more thankful,” said Moggre of Flower Mound, Texas. “It’s quite a surreal feeling. To be on the team here really meant a lot. MTM Vivre la Reve is my top horse at the moment. He’s a horse I know like the back of my hand.”

Moggre has had a fantastic career since winning the Maclay finals just two years ago, having also won two Grand Prix, including one at The national just one year after he won the Malcay there.

Fellow young rider Porter, 22, of Wellington, Fla., also was clean in the opening round and had a single rail in the second riding longtime partner C Hunter, a 13-year-old Zangersheide stallion by Cassini II out of Corland.
Lucas Porter and C Hunter by Sportfot 536_3004 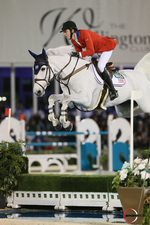 Luca Porter on C Hunter (Photo by Sportfot)“I was really thankful to be a part of the team, and I aimed at this Nations Cup since the start of the season here in Florida,” said Porter, who was also making his senior Nations Cup debut. “I thought my horse jumped two great rounds tonight. He jumped a really amazing first round and was a bit unlucky with my rail, but I’m really happy with him. We’ve come a long way together. I look forward to what the future holds with him. He’s a really special horse to me and our family.”

Pulling through for a clear in the second round to help his team’s total, Kocher, 36, of Wellington, Fla., and Squirt Gun were pivotal for their team in the rider’s second Nations Cup team appearance.

“He’s by far the best horse that I have at the moment,” said Kocher of the 9-year-old Oldenburg gelding by Diarado ot of Quick Star. “Last year in the high schooling jumpers at WEF, I fell off him our first time out, so it’s incredible what 18 months can do. He’s the best horse I’ve ever had so far in my career.”

Coming in with the most team experience under her belt, Sternlicht, 26, of Greenwich, Conn., served as the anchor rider and posted a clear round with Just A Gamble, but did not return for the second round thanks to her teammates scores having already secured the win. 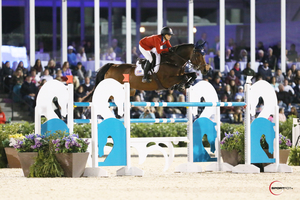 Adrienne Sternlicht on Just A Gamble (Photo by Sportfot)Although she is just 26, Sternlicht has already ridden on a number of winning Nations Cup teams as well as having been a member of the World Championships gold medal team.

“I’m very thankful for my teammates who made it very easy for me,” she said. “I think we’re a young team, but have a lot of strong riders who have had consistencies leading up to this event. I think that was showcased in their awesome rides."

“It took me awhile to get to know Just A Gamble, but I think our partnership really started to solidify,” said Sternlicht of her 11-year-old Belgian Warmblood mare. “She’s been very consistent. I would say that she ranks as my second or third horse, and she’s been an unbelievable support system for my top mare, Cristalline, just coming back.”

“This team was chosen right down the ranking list of the applicants, and to see them do that tonight was just amazing," said Ridland of the team’s performance, which also marked Porter’s senior Nations Cup debut and Kocher’s first time jumping the two consecutive round Nations Cup format, having previously only jumped the 2018 FEI Jumping Nations Cup Final Barcelona CSIO5* over two days.

“Everybody was basically having their debut tonight until they came to the anchor rider, our veteran anchor rider, Adrienne,” said Ridland, referencing Sternlicht’s third consecutive year appearing on the U.S. team for the FEI Jumping Nations Cup Wellington. “It was really exciting to be able to do that."

“It really fits into what we’ve always tried to do." said Ridland. "You can have a team of three veterans and two newer riders, but it’s all in the same spirit of giving experience when it really counts. There’s nothing like pressure at home, it’s Saturday night with everything on the line, and nobody in the stands cares that this is their debut. They’re rooting for the Americans! The American flag was everywhere, and it’s a different kind of pressure at home. For these riders to experience that and to have the flag on the saddle pad for the first time, this is invaluable.”