WELLINGTON, Fla--McLain Ward has had a fantastic run for the past two weeks. 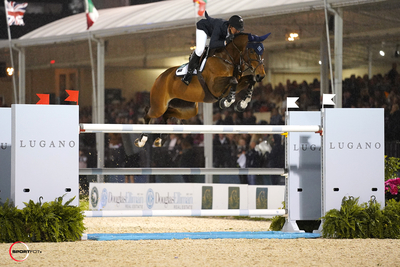 McLain Ward on HH Azur (Photo by Sportfot)During that short time period, he has won two Grand Prix on Noche de Ronda, a very talented new addition to his string of top mounts, won a third Grand Prix on his super mare and 2016 Olympic mount HH Azur and had a second daughter, Madison, on Feb. 18 with his wife Lauren.

The Wards have been married for 10 years and their first daughter, Lilly, is now 5.

“IT'S BEEN A pretty incredible few weeks. My team is doing an amazing job,” said Ward, who also won the Grand Prix CSI5* during WEF five and the Grand Prix during Deeeridge's Nations Cup week riding Noche de Ronda. “I’m lucky to have phenomenal horses and owners, to be able to have multiple horses that can win at this level. If we’re really honest with ourselves, sometimes you can do nothing right, and sometimes you can do nothing wrong. We’re in one of those streaks, and we’re going to enjoy it and try to keep doing our best.”

Alex Granato of Salt Lake City, Utah, who had the time to beat Ward but had a rail down on Carlchen W, was third on four faults in 38.87 seconds.

HH Azur is making a comeback from a minor injury that sidelined her during the Nations Cup Final in Barcelona in the fall of 2019.

“Tonight, she felt great,” said Ward. She’s getting a little older, has jumped a lot of big jumps in her life, and been an incredible partner. You count your jumps at this stage in a career. We stopped for the year after Barcelona, but we kept her in light work.”

“Once I got through the double, I took a touch off coming home," said Ward. "For sure I left a little room, but a lot of times you can lose it before you get started, and I didn’t want to do that. For me, Santi is one of the best course designers in the world. He’s a horseman course builder, and I think he’s going to do a brilliant job at the Olympic Games.”

Capt. Cournane is now in his third year piloting Penelope Cruz, and he stepped the mare up to the five-star level just two weeks ago at WEF.

“She’s been jumping great in 1.50m league on Sundays,” he said. “Tonight, she really felt on form and jumped great."

“It was very clever course building,” said Cournane of the track that proved to be a challenge for many. “The water jump came up early, and got the horses really open. The skinny at the ingate really got a lot of people. The combination was also very difficult.”

Granato was third despite some last-minute wavering in his jump-off plan.

“I had definitely walked the inside turn to the double during the course walk, and I was planning it,” he said. “But, it didn’t go well for Eduardo, I saw Brian go around. I looked at it two or three times once I was in the ring. I was a little unsure, but as soon as I started, Carlchen W felt really with me. If anything I got in his way. He turned so well into it, and I pushed a little bit out to give him a little extra help and caused the rail at B.

“I was really happy with him,” said Granato of his 12-year-old Mecklenberg gelding that he plans to point toward the World Cup Final in Las Vegas, Nev., this spring. “I thought he performed well, and I am excited for how he feels.”

Darragh Kenny of Ireland on Romeo 88 was fourth with four-faults in 39.30 seconds, while Brazil’s Eduardo Menezes was fifth riding Magnolia Mystic Rose with four faults in 40.10 seconds, and Daniel Coyle of Ireland finished sixth with two knockdowns in 43.36 seconds on Legacy.