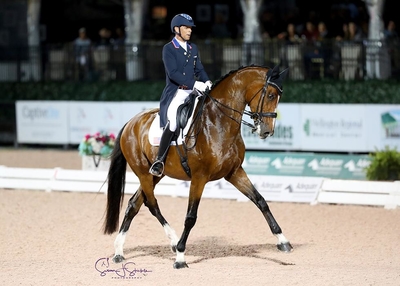 The 55-year-old California-based rider rode Suppenkasper to their third highest career grand prix score, leading the field of 12 with 76.239 percent, just 0.63 percent shy of their best ever in this test, which they laid down in  week five to remain unbeaten in their seven starts so far this year.

Both second-placed Sabine Schut-Kery and Canada’s Brittany Fraser-Beaulieu posted identical scores on the board of 73.674 percent, so the standings were decided by the only collective mark, with Schut-Kery’s rider mark on Sanceo higher than Fraser-Beaulieu’s on All In.

“HE WAS GREAT, even more relaxed than last time," said Peters of Suppenkasper. "I rode the first pirouette just a tiny bit too late and then I didn’t have enough time to prepare the change at X, so it got a little crooked and it wasn’t a good score. The rest was very clean."

“The passage and piaffe felt better," said Peters. "I’m able to ride the piaffe a little bit more in place. Debbie McDonald and I have been working on it. That’s been so much fun. It’s amazing the work and the collaboration with Debbie here in Wellington. She deserves a huge part of that 76 percent.”

“He’s so eager to go forward," said Peters. "The horse has so much tremendous power, there was not a single moment where I was pushing him. His desire, even in the piaffe, is to go forward. So I ride it – I do five or six steps, and then I halt. Instead of leaping forward into trotting or running into the passage, we halt or even rein-back and say, ‘Listen buddy, we stay here a little longer.’ That wasn’t possible even six months ago, so it’s a huge step."

Schut-Kery showed tremendous improvement from her and Sanceo’s only other grand prix test of 2020, improving from 65.9 percent to over 73 percent. 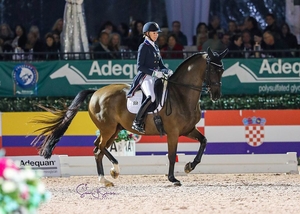 Bateson Chandler, who had not competed Alcazar since September 2019, said: “I’m really happy because it's a bit scary not having shown for a while and the first show being a five-star, but I really wanted to get him in this class. It was brutally hot out there, so to put in a basically clean test in that heat, I’m super proud of him.

“He’s really trying so hard for me now and that’s all we can ask,” said Bateson Chandler, who has ridden Alcazar at international grand prix for five years. “I’ve had to have a bit of faith and trust in him now because we’ve done this enough to know that we know each other well enough that we can pull it out."

“My preparation has been a slow build,” she said. “This is a long season, and we have a long way to go for our qualifications to Tokyo, so I didn’t want to come out too early. Our qualification system is quite intense and quite long, so we wanted to be a bit careful.”

Bateson Chandler then made it two wins from two starts in week seven of the Festival.

The Dominican Republic’s Yvonne Losos De Muñiz was second on 75.115 percent on Aquamarijn, and Juan Matute Guimon of Spain improved one place from his finish in the qualifying grand prix to place third on Don Diego on 72.76 percent, despite a challenging ride in the windy conditions.

Bateson Chandler was a groom for Robert Dover for 16 years and is now aiming for a place on the USA team for the Tokyo Olympics with Clark’s Contango gelding.

“I’m really happy because two or three years ago, my horse used to have a real issue with anything that moved – he’s a little bit of a spook that way," she said. "He went in there and didn’t look at anything and won the class.”

“Tonight was the first time that I’ve actually done my floorplan to my music correctly and not been behind or ahead," she said. "I do a double pirouette and then a one-and-a-half pirouette. In Olympia, I did a double and then a double, and then I was facing the wrong way, so I’ve had some issues with that.”

Bateson Chandler travels to the UK to train with Carl Hester every summer, and with his help she continues to get the best out of 15-year-old ‘Lonsie’, who has been competing at international grand prix for half a decade and survived a colic operation in the summer of 2016 while in Germany.

They are now unbeaten in their last four starts.

Despite the AGDF being a well established show, there are possible plans afoot to continue its expansion after the popularity of the Thursday night classes, in addition to Friday under the lights. 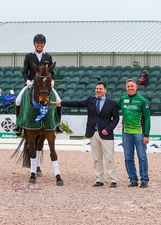 Guenter Seidel on Beltano (photo by Susan Stickle)Director of Sport Thomas Baur explained: “We will look into expanding some Thursday nights for the future. Maybe for the five-star week next year and maybe also for the Nations’ Cup. I’d love to do it, because it was really nice atmosphere here both last night and tonight.”

In the Prix St. Georges CDI1*, Günter Seidel was untouchable, breezing away with the win by more than 5 percent on Beltano, who scored 73.922 percent.

He was last to go in the 16-strong class and put Katie Johnson on Quartett into second, with Canada’s Diane Creech onRobbie W finishin third.

This was Beltano’s second win of the 2020 AGDF, having also led the same class in week five.