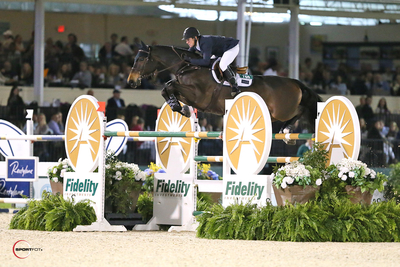 McLain Ward on Noche de Ronda (Photo by Sportfot)Of the 40 starters over nthony D’Ambrosio’s and Andy Christiansen’s first-round track, 12 were clesn to advance to the jump-off.

U.S. Olympic team silver medalist Kent Farrington and Gazelle were leading on a time of 39.51 seconds when Ward entered the ring.

To the roar of a home-country crowd, Ward and Noche de Ronda broke the timers double-clear and the ones to beat in 37.47 seconds.

“That’s about all Ronda and I had to give,” said Ward. “I think for any of us, at that level, when you get to go after the one that sets the time, you have a bit of an advantage. Normally, you come out by winning or crashing, one or the other. It all came off very nice and the horse really performed spectacular.”

WARD GOT the ride on Noche de Ronda as part of a dream realized for owner Marilla van Beuren.

Ward owns the 11-year-old Oldenburg mare by Quintender out of Loves Corinth with van Beuren and Bob Russell.

The mare was only jumping 1.35m with Ward a year ago when some injuries in his string sent her on a plane to the CHIO Aachen Nations’ Cup where she jumped double clear and paved the way for herself as a top contender for big events.

“Marilla has been in this game and been an avid fan and follower of the sport for many years, and it was her dream to own a grand prix horse,” said Ward. “We found this mare last year with Maarten Huygens that was produced by Manuel Lecuona of Mexico. It’s been a really wonderful story for us and her. It’s nice sometimes when the good guy wins.”

The clear crowd favorite judging by the cheers as he cleared the final fence of the jump-off, Ward admits that nights like this are still a thrill.

“It doesn’t get easier, the stress doesn’t get less, but it’s a little bit like a drug," said Ward. "I love it, and it’s killing me at the same time I’m very excited about these nights. I’m still nervous for the big nights, but I really find great pleasure in the fight. The victories are nice, but the battle and the fight between Kent and I and several others, in the end, is what gets our blood up.”

“I got beat today by a top rider on a horse with a giant stride,” said Farrington. “He pulled out all the stops and took a big risk to win and pulled it off. It was a good win for McLain."

“I’m very happy with my horse; I’m very unhappy with second!” joked Farrington. “When we’re going against each other, these are the best riders in the world. My hat’s off to him for a big win.”

Canadian Olympic champion Eric Lamaze was third riding Chacco Kid, with a time within a second of Farrington’s on 39.69 seconds.

“Anthony did a great job tonight,” said Lamaze. “He provided some entertainment in the jump-off! I always say, ‘It’s how your distances come out of the corner.’ If they come up and they’re quick, you take them. But, sometimes they don’t come. For McLain, they were there.

“It was a great class, and I’m so grateful to have this horse,” said Lamaze. “He’s a real fighter and he’s careful. He’ll try his heart out for you. When you feel that underneath you, you can enter a lot of classes.”

Nicole Shahinian-Simpson led for a time, but settled for fourth on Akuna Mattata in 40.75 seconds, while Paris Sellon was fifth riding Cassandra in 41.15 seconds.

Her second-place finish in the Equinimity WEF Challenge Cup Round 5 earlier in the week, combined with a top-10 finish on Saturday night riding Just A Gamble, guaranteed her the award.