WELLINGTON, Fla.--Erin Davis-Heineking, 43 of Weatherford, Texas. returning too competition after 20 years of just teaching, with only one horse and at the Winter Equestrian Festival for only two weeks, won the $137,000 Grand Prix CSI3* on Saturday, Jan. 25. 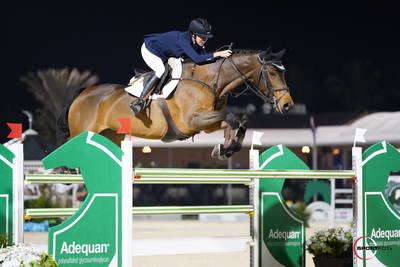 Erin Davis Heineking on Leonie (Photo by Sportfot)Davis-Heineking rode Leonie to lead the grand prix from start to finish after posting the first clear round over Kelvin Bywater’s track.

She again returned first in the six horse jump-off and set the pace, going clean in 45.51 seconds, barely beating Ireland’s Shane Sweetnam on Karlin van’t Vennehof who finished in 45.67 seconds.

“I was a little bit in disbelief that I had left a couple of jumps up out there,” said Davis-Heineking of her jump-off ride. “It didn’t quite go as I planned. I had an idea in my mind of the numbers that I wanted to do, and then right before I went in, my trainer/husband Christian basically said to leave one out from all of those. So, I took a shot at the last line and tried to do the six. I chipped in a seven, and she left it up. I was really proud of her.”

LEONIE, an 11-year-old Oldenburg mare, joined Davis-Heineking’s string two years ago when she came out of retirement to pilot the mount.

“She was a sale horse of my husband’s, and he was trying to get me back in the saddle,” she said. “He told me to play around with her at home. I did, and before I knew it, he had talked me into going in a small grand prix close by. I almost won it, and got the taste again. Honestly, I never saw myself here two years ago, so it’s been quite a ride.”

Davis-Heineking competed at WEF in the amateur jumper ranks in her 20s.

“I never really imagined that I would win one of these grand prix!”

“This is the biggest class that she’s ever jumped, so she was going super high in the first round,” he said of the 10-year-old Belgian Warmblood mare. “I was trying to compete in the jump-off going as fast as I thought she’d be comfortable under the lights. Erin had an amazing round. I’ve known her since I was a kid riding in the Midwest, so I’m really excited to see her here in Wellington and coming out with a big win.”

Ward has just started riding the 10-year-old Holsteiner gelding, but he has wasted no time getting Catoki to the winner’s circle.

Ward topped a field of 59 over Kelvin Bywater’s speed track by a nearly two-second margin over Mexico’s Santiago Lambre on Doloris.

Ward stopped the clock and 57.54 seconds, while Lambre settled for second in 59.12 seconds.

“He’s naturally an incredibly fast horse, so in the speed classes you have a little bit of an advantage,” said Ward. “Santiago is a very fast rider, but this horse is, I think, the fastest horse I’ve ever ridden. I knew turning for home we were very fast, and if things come up basically as you want, he’s just naturally faster than most horses, so you don’t have to do anything extraordinary.”

Catoki joined Ward’s string just before the start of the WEF season, but he has high hopes for the gelding.

“He’s going to be a great part of our string. I’m excited for all of his owners and to have him to compete on. His best qualities are his carefulness, and he’s also got a big heart. He’s brave and takes on the course like a lion.”

Adrienne Sternlicht on Just A Gamble finished in third on a time of 59.19 seconds.