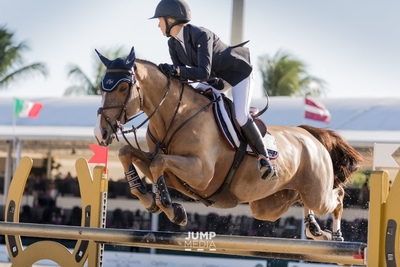 Lillie Keenan (Photo by Jump Media)After a top placing in the $37,000 WEF Challenge Cup Round 2 CSI2* on Thursday, Jan. 16, Keenan was again in contention for the award she won during week one.

The 23-year-old and her mount Fasther then won the award with a fifth-place finish in the $73,000  Grand Prix CSI2* after leading the way by posting the first clear in the opening round.

It’s great to start out on a strong foot,” said Keenan after her win during the first week of WEF. “I’m ridiculously lucky to have these special horses that are on the young side and just working their way up. I get to learn with them, and they were unbelievable all week. I’m so grateful to the team behind me; my parents for supporting me, my management, grooms, and of course my trainer, McLain Ward. Hopefully the circuit continues like this!”

“I WASN'T expecting it this week, but it’s a great way to continue the season,” said Keenan. “I so appreciate Martha’s support of women in show jumping. It’s a great place to be and hopefully next week I can add a win in the grand prix!”

Keenan has had a banner two weeks aboard Fasther, a 10-year-old Dutch Warmblood gelding that came from Moerings SportHorses in the Netherlands.

“McLain Ward and François Mathy found him for me, and we bought him from the family who bred him,” said Keenan, who trains with Ward. “They produced him, and he’s their family. They watch every time I jump, and it’s fantastic to have a relationship with breeders like that. They motivate me to show what good breeding and raising a horse right can do.”

For her week two title, Keenan was presented with a bottle of champagne, a bouquet of flowers, and a gift certificate for a shopping spree at Hunt, Ltd. by Martha W. Jolicoeur and Dr. Stephen Norton.

CATHERINE WACHTELL of Chatham, N.J., finished third on Coverboy behind Great Britain's Emily Ward and Sydney Shulman of Greenwich, Conn., in the $25,000 Under 25 Grand Prix CSI2* on Jan. 19. 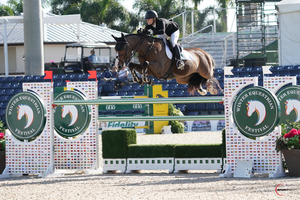 Wachtell, 24, is in her second year of law school at Fordham University in New York, NY.

“The course really tested rideability, and my horse and I have a good partnership,” said Wachtell of the mount she’s had for nine years. “He’s not the fastest or the most scopey, but he listens really well, so that worked to my advantage.

“I feel lucky to have been able to develop with him,” continued Wachtell. “We went from Low Junior Jumpers to Mediums to Highs, and now to be able to do the Under 25 is really special. I am a weekend warrior and a true amateur. I flew in on Friday on a 7:30 a.m. flight, and I had to just get on and go. Having a horse that you have a special partnership with is the only way to make it possible.”

After winning the Hermès Under 25 Welcome just a day earlier, Ward wasted no time in establishing herself as the one to beat this season.

“I’ve actually never competed in America before, but I am off to a great start,” said Ward, 20, who rides for Canadian Tiffany Foster’s Little Creek Equestrian. “We’ve owned Millioninmind since he was 6 years old, so we’ve had him quite a long time. He took me on my first senior Nations Cup team, and won my first international grand prix with me. Now, he has come over here and flourished.

Fractions of a second off the win, Shulman’s top finish was an early birthday present to herself before turning 25 on Monday.

“It’s an amazing division,” she said. “It’s a great stepping stone for riders like me. When I was younger coming up, and I couldn’t do FEI legally, it was great to get my feet wet in FEI competitions. The horse I did today, Azilis du Mesnil, I bought her a little less than a year ago, and she’s so competitive. She was a little bit green when I got her, but all she wants to do is jump the jumps and go fast.”

WEEK TWO for hunters ended with Stephanie Danhakl, who trains withScott Stewart and Ken Gerkley of Flemington, N.J., riding her new mount, Tufton Avenue, to the Amateur-Owner Hunter 3’6” 18-35 championship by winning three firsts, a fourth, and a fifth. 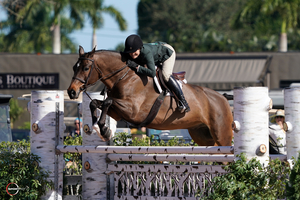 Stephanie Danhakl on Tufton Avenue (Photo by Sportfot)After riding Tufton Avenue only one time, Danhakl walked right into one of her favorite arenas, the E.R. Mische Grand Hunter Ring, with her new mount.

“Yesterday I was still trying to figure him out but we still had two good trips, and then today he won every class. I couldn’t ask for him to be more perfect!” said Danhak of Pacific Palisades, Calif.,who is pursuing her PhD in Art History at Boston Universtiy.

“Even when I make a few mistakes he just jumps higher and better,” said Danhakl.

Tufton Avenue is a first year green horse that was ridden and brought along by Katie Cooper of Owings Mills, Md.

“She has done an incredible job with him, he doesn’t feel like a green horse at all,” said Danhakl.