Laura Chapot wins a second 1.40m jumper class at WEF, while Canada has dominated in dressage

WELLINGTON, Fla.--Laura Chapot again placed both first and second in a 1.40m class, this time in the $6,000 1.40m Speed Challenge on Friday, Jan. 10, during opening week of the Winter Equestrian Festival (WEF) at the Palm Beach International Equestrian Center in Wellington. 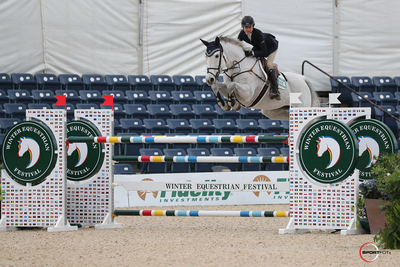 Laura Chapot on Thornhill Kate (Photo by Sportfot)WEF continues through March 29, 2020, with 12 consecutive weeks of world-class competition and prize money of $13 million dollars.

Her time of 57.849 seconds was good enough to bump her second-place mount and Wednesday’s winner, Out of Ireland, a horse she owns with The Edge, into the runner-up position in 57.855 seconds.

“I WAS THRILLED that she went as well as she did and I am hoping to move her up by the end of season,” said Chapot of the mare she imported from Ireland four years ago through Irish Olympian Cian O’Connor and owns with her mother Mary. “She has been a really good horse for me, so it’s nice to start off on such a good note. It’s so exciting to have the horses jumping this well so early. They feel fresh and enthusiastic about going in the ring!”

Chapot is back in Wellington for the season with a dynamic string of horses, saying, “There are so many classes offered here, so we always bring a large string with some young ones, some that are moving up, and a couple for the big classes.”

When asked about the upgraded footing that was installed in the International Arena in preparation for WEF, Chapot was complimentary.

“It seems really good so far.," she said. "The horses like it and they are jumping great. They put in a lot of effort into stepping this facility up every year and are very conscientious about trying to do the best thing for the riders and horses, so I think this is a step in the right direction.”

Argentina’s Tomas Yofre took a chance on catching Chapot, but wassn't fast enough and settled for third in a time of 60.216 seconds riding Dasino.

Luis Larrazabal of Venezuela on Luminaria LS La Silla was fourth in 62.627 seconds, while Peter Lutz on Quinta 106 rounded out the top five in 62.847 seconds.

DAY TWO of the opening week of the 2020  Global Dressage Festival included the first Friday night under lights of this competitive season at the Palm Beach International Equestrian Center. 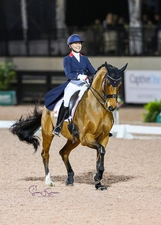 The result in the Grand Prix Freestyle was an exact repeat of the previous day’s results, with three Canadians, all trained by Ashley Holzer, on the podium.

They were led by Jill Irving on her own long-time partner, the De Niro gelding Degas 12, who scored 76.06 percent, a personal best score.

Brittany Fraser-Beaulieu rode All In to second place on 75.74 percent, while 23-year-old Naima Moreira Laliberte was third with 75.645 percent on Statesman.

“Degas is 18 this year so I’m thrilled with his energy,” said Irving, who rode to a Beatles compilation. “His piaffe and passage felt great. He’s really flexible and, with age, he’s become less nervous, which used to be an issue. I was super thrilled with him, and it’s really fun to be part of all this at Global. It takes a village to make this sport roll.”

“This is my second competition back, and he’s the type of horse that needs to be in the ring a fair amount, so yesterday in the Grand Prix I felt he was a little sticky and unsure," said Fraser-Beaulieu, who is back riding after the birth of her first child in the summer of 2019. "Today he came out ready to rock. The beginning of my test felt incredible, the best feeling I’ve ever had on him. Then I had a mistake in my ones, which was a pity.”

Laliberte was riding in her first Friday Night Stars class, a long-held dream of hers.

“I’m really happy to finally be competing here." she said. "I thought Statesman did a great job in there. It’s a different atmosphere and apart from one rider mistake, the rest felt quite amazing. We’re still newcomers, so I’m happy to break the ice.”

This is her third season with the 13-year-old Sandro Hit gelding, and only their seventh grand prix competition together. They were part of the gold medal winning Canadian team at the Pan American Games in July 2019 and this was their first show since then.

The 2020 season’s first small tour class, the Prix St Georges CDI3* also went to Canadians, with Ariana Chia returning to Wellington with Fiderflame for the second year running and winning their first class of the show.

The 10-year-old gelding by Fidertanz was the only one to break the 70 percent mark, scoring 71.47 percent.

In the Prix St Georges CDI1* class, all three top finishers of the nine starters scored over 71 percent, with the win going to Great Britain’s Susan Pape on Bourani.

Second was the breeding stallion Bon Coeur 1389, ridden to 72.529 percent by Sweden’s Caroline Darcourt, and Katie Johnson of the U.S. on Paxton rounded out the top three.