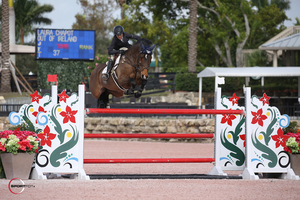 Laura Chapot on Out of Ireland - file photo from WEF last year (Photo by Sportfot)Picking up right where she left off last year, Chapot placed both first, on Out of Ireland, and second, on Calafornia, in a 1.40m class of 74 entries.

Chapot often places one two or even one, two, three, in classes with up to 120 entries.

Chapot also placed second in another 1.40m class on Thornhill Kate and third in a 1.30m class on Gideon.

Out of Ireland, Calafornia and Thornhill Kate are all horses Chapot has had for a while, and all three have been consistant winners at WEF.

"WE HAVE 16 horses down here, including a few for customers," said Mary. "They haven't jumped much since October, so they may be a  little rusty, but they're fresh and eager to go."

"We're hoping to have Chandon blue in the Grand Prix this weekend," she said.

Stewart won two classes in the High Performance Conformation Hunters with Critic's Choice, winning the Model and one over fences class.

Stewart also won with Charlemagne in Green Conformation, who was second in the Model but won over fences.

It was beautiful here today," said Chapot. "It was about 70 degrees. The horses need blankets at night, The natives are all complaining about how cold it is, but it's beautiful after coming out of the frozen north."