WELLINGTON, Fla.--Kent Farrington of Wellington is one of the top riders who have escaped the North to arrive in Florida and start competing at  the Holiday series prior to the Winter Equestrian Festival, which begins in January. 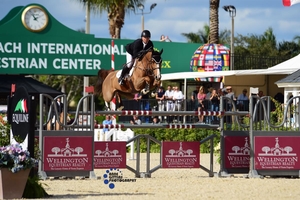 In second, Wilhelm Genn of Lebanon, Ohio on Van Gogh finished the short course in a time of 42.925 seconds, while Luis Larrazabal of Wellington on Caristina was third after stopping the timers at 43.747 seconds.

Course designer Anthony D’Ambrosio had 28 compete in the first round, with 12 returning for the jump-off.

FARRINGTON said that the course was well-suited for greener horses or horses that need to build confidence:

“You didn’t see any triple combinations today, but there were three doubles, which for greener horses or for horses that are building, is a more fair test," said Farrington. "For Kaprice, it’s great because she’s getting to see multiple types of combinations.

“Kaprice is really a special horse, she’s unbelievably careful," said Farrington. "I’ve moved her up and down because of that. She’s similar to a lot of the great horses I’ve had in the past where she borderlines on too careful, so it’s all about keeping her confidence level high."

Coming in at a close second place with a time of 36.852 seconds was Tanimara Macari of Mexico on Clio S, while Ramiro Quintana of Wellington rode Turner St Ghyvan Z to a third place finish with a jump-off time of 39.767 seconds.

Farrington on Kaprice also won the $10,000 Open Stake on Friday after clearing the short course in 30.639 seconds.

Gianni Gabrielli of Wellington on Chaco 34 finished the jump-off in 31.702 seconds to clinch second, while Taylor Land of Newnan, Ga., rounded out the top three with a jump off time of 32.083 seconds riding Get Go.