LEXINGTON, Ky.--Just one year after winning the Medal Finals in Harrisburg, Brian Moggre, 18 of Flower Mound, Texas, won the $225,000 World Cup class at The National Horse Show on Nov. 2. 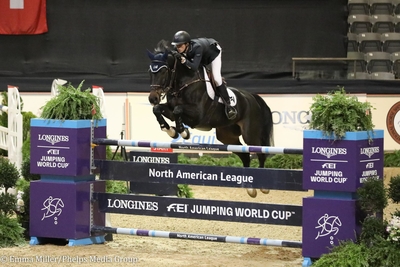 There was a fund raiser for Kevin Babington, who has suffered a spinal cord injury, attached to the World Cup that raised almost $90,000.

Although 12 went clean over Ken Krome's course, four of those has a time fault, so eight qualified for the jump-off.

Kelli Cruciotti on Hadja Van Orshof was the first clear in the jump-off, finishing in 38.63 seconds to take the early lead.

THREE ROUNDS later, Karen Polle on Kino tripped the timers in 34.44 seconds to best Cruciotti by an incredible margin of more than four seconds. 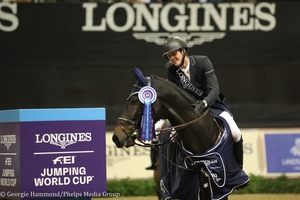 Brian MoggreThough that time set a swift precedent, Moggre laid laid down a trip with MTM Vivre Le Reve as the second-to-last in the returning order, crossing the finish line in 34.22 seconds to take the lead.

Last to go, Beat Mandli on Simba had the advantage as the final contender but had the last fence down.

Moggre won the class with Polle second and David Blake of Ireland on Keoki in third place.

Moggre had previously won a World Cup in Ocala in March.

Now with 41 points, Moggre is second in the World Cup standings for the North American Eastern Sub-League, just under Beezie Madden’s 48 points.

Daniel Coyle of Ireland, who won two speed classes and was second in a third was the Leading International Open Jumper Rider, winning a one-year lease of an Audi Q7, while Lillie Keenan won the Leading Lady Rider Award.

Over the course of the week, there was a “Bid for Kevin” fundraiserin which people bid on riders competing in the $225,000 World Cup for a chance to win lessons with some of the sport’s greatest athletes.

“That moment for me was something that I never expected to feel, especially in this year and where I am in my career," said Moggre. "That horse is so special to me and has taken me through all of the ranks. I won my first FEI grand prix with him at Live Oak in the spring, another World Cup class, so to be able to win that and the 4* this week was not even in my imagination. He was really on his game today and luckily I was on mine. It was awesome.”

“I think that the places that made up the time for me was the turn back to the combination on the side, fences 10a and 10b, and to the last jump," said Moggre. "I took a gallop for it and really hoped that he was on it and he was seeing what I was seeing. I didn’t necessarily make too tight of turns but I stayed on a galloping pace and he saw all of the jumps. We both wanted that win very badly.”

“World Cup Finals is a huge goal of mine," he said. "I did the class at Split Rock in Ohio and I did the World Cup at the American Gold Cup to touch all of the bases so far. I found out about a week ago that I got into Toronto next week for the Royal Fair, so I will do that and hopefully it will keep going as it is going and we will be in Las Vegas for the Finals.”

“I have had Kino for two and a half years now, and we don’t have much experience in really fast jump-offs, so this was our biggest accomplishment together so far," said Polle. :I was really, really happy with how he jumped today. He tried really hard in the first round and in the jump-off I took a bit of a shot. I was really happy with how he handled all that, and going into next year our partnership is starting to solidify really well and hopefully we can keep performing like this going forward."

“Walking in, we knew it was going to be tough because of the amount of clears that there were in the qualifier, so it was a great course tonight," said Blake. "The turn to fence four was very unusual I thought. It was my first indoor show on that horse, so it was quite unusual to turn into the wall ,and that caused a lot of damage for people. The course seemed to suit bigger horses with stretchy distances, so I was happy with how it all walked because my guy has a big step so it was all as I walked.”

“It is my first indoor in the USA and his first indoor ever, so I didn’t fancy that the atmosphere was big enough when we went in cause Karen was right before and she was clear so that got him on his toes a little bit."  Blake said. "I really enjoyed it. I would like to thank the sponsors and the organizers, because I just got in on the last minute so it was worth the trip.”