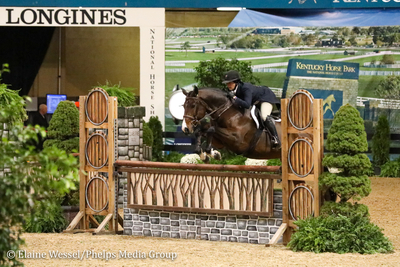 Amanda Steege on Lafitte de MuzeSteege laid down two great rounds for the win, along with a one-year lease of an Audi as well as the lion’s share of the $10,000 Leading Professional Hunter Rider Bonus.

THE CLASS consisted of two rounds, with the top 12 returning for a second round from low to high score within their respective heights.

Tied with a score of 89 but competing over lower fences, Michael Dennehy and Hulla-Balou were second following the first round and Steege and Lafitte De Muze rounded out the top three contenders with a score of 87.50. .

The top 12 combinations were tested once more in the handy phase of competition.

Murphy’s course included a long approach across the entire arena to fence one, a two-stride in-and-out and multiple rollback turns to display handiness, plus entries were challenged to choose two fences to hand gallop out of the provided obstacles.

Second-to-last to go, Steege and Lafitte De Muze, starting with 87.50 points, scored the same in the second round to total 175 with only one rider, 2018 champion Stewart, left to go.

Although Stewart and Private Life turned in a good final trip, their score of 87.50 left them just shy of the title with a final tally of 173.50 points, making Steege and Lafitte De Muze the 2019 victors.
Image

Steege won half of the $10,000 Leading Professional Hunter Rider Bonus, with the remainder going to the second- and third-place finishers in the cumulative standings.

Stewart was awarded $3,000 as the reserve finisher overall, while Jeff Gogul earned a $2,000 bonus for third place in the rankings.

“I think all of us riders talked a lot and went back and forth over what jumps we wanted to hand gallop," said Steege. "That was interesting. I have never had a course like that in a class where they gave us the option of hand galloping two jumps, let alone the jumps that were of our choosing. I ended up picking fences five and eight. I decided that since I was galloping jump eight that I would go around fence one in order to get a good gallop there. My plan was to do the best that I could and show off as much as possible and see where everything fell in the end. I was happy with my hand gallop jumps. My boyfriend of 15-years, Tim Delovich, was joking with me after the round that he has never seen me go that fast on any horse ever!”

“This class is such a highlight of our year," said Steege. "I really encouraged my owner to send my horse to this horse show, not only because it is the National Horse Show, but also because I think it is really important to support hunter events and hunter classes that give out this level of prize money and have this level of atmosphere. I showed two horses in this class last year, Zara and Lafitte. Last year was Lafitte’s first year in America and first year as a hunter and he got a little nervous and green in this class last year, so it was nice to see how much he has matured this year and how much more relaxed he was about the whole thing. I am really proud to have been in the top three for two years in a row.”

“It is a little surreal sometimes," said Steege. "I really have to take a step back and think about it. I know that it is very important to Cheryl and myself that he does donate his prize money and that there is a whole other purpose to these wins other than to just keep accolades for ourselves and in our own home. It makes it more special for me that he can do that, especially in the bigger classes because that was a lot of money for the EQUUS Foundation. Now, I know some people also started to have their horses be equine ambassadors. I know that Caroline Moran has a horse that is an equine ambassador and to participate in that is so meaningful.”

“I am very excited about Lafitte," she said "This is my second year with him and last year was his first year in America as a hunter. The goal is to start to do more derbies and go to Derby Finals, so this year he did the Green 3’9” Hunters and I started to add in some derbies. He went to his first Derby Finals so next year he will start to do the High Performance Hunters and do more and more derbies and hopefully make it to Derby Finals again.”

“Lucador(who was fourth) is a little more temperamental than Private Life so I can only push him so much," said Stewart. "I think I chose to do the same hand gallops as Amanda. I was hoping to do a hand gallop to fence one but I sort of just went with him. He let me gallop more that I thought I could to the ones that I did do, so I was really happy with him. With Private Life, I didn’t really get to see Amanda go over the shortened course so I figured I would just have to go for it and I was really happy with him.”

“I think it is a great opportunity for us to bring our best horses forward and get excited about doing this class, which we do not get to do very often," Stewart said. "It was a true hunter classic and not a derby, and I think that we all, me especially, want to do our best and qualify at the last horse show of the year. I want to thank everybody for putting on a great horse show for us.”